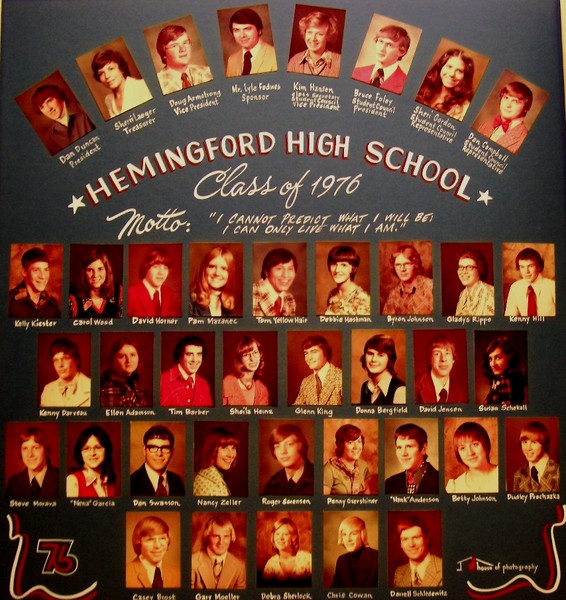 Student Council Highlights  The student council helped to direct parents to the correct classrooms during Parent-Teacher conferences, as well as attending state convention in York. There were assemblies sponsored for all students as well.

Music Department A highlight was the cancellation of the Panhandle Conference Choral Clinic, set to hosted by Hemingford! Since the clinician, Dr. Raymond Miller, University of Nebraska was already in town when the storm hit, he worked exclusively with the Hemingford Chorus. Ms. Barb Ball was a student teacher at HHS, and assisted Jim Miller, Music Instructor.

Hangin' out in the Parking Lot - Still a student favorite! 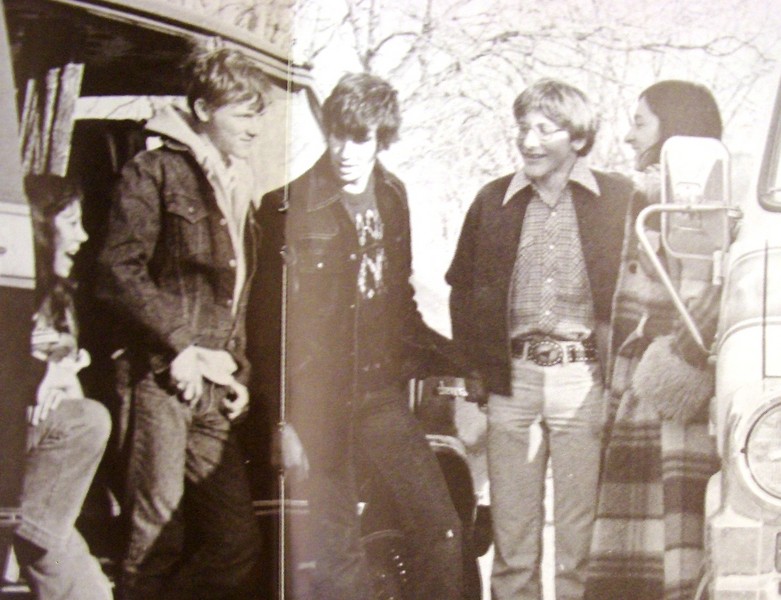 Launch the media gallery 2 player
Hangin' out in the Parking Lot - Still a student favorite!
Musical The drama club helped to host a presentation of , 1776, a play put on by The Continental Theatre Company of Kansas. It was funded by grants from the Nebraska Arts Council, the Village bicentennial committee, as well as numerous contributions from the community and local merchants.

Volleyball  The team finished with a solid 10-7 record, including first round wins at the Hemingford Invite and at districts. They were conference runner-ups in the Panhandle, beating Harrison and Hyannis, and losing to St. Agnes. Coach Knaubs team broke in the new gym floor with a victory over Rushville. Sue Smith, Colleen Katen, Penny Overshiner, Carol Wood, Sue Schekall, and Sheri Gordon were all members of the team. Carol Wood was the outstanding volleyball player for the year. 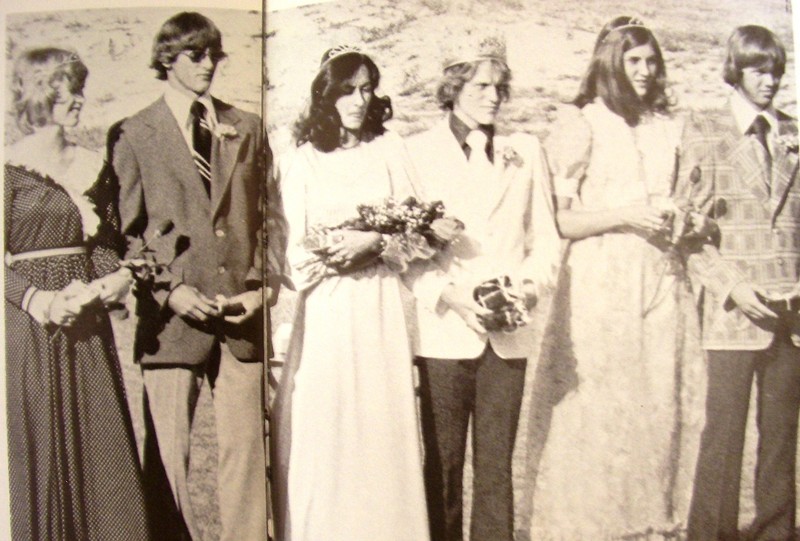 Boys Basketball 17-6, with a berth in regional play-offs, and a shot at state had Coach Dale Riens team fired up in their game against North Platte St. Pats. Though they fell short, the season was a great one for Bobcat fans, as they were CSC Tourney Champions, Panhandle Conference Runner-ups, and District Champions. Individual all conference honors went to Tom Yellow Hair, Steve Morava, and Dan Lliteras.  The JV team, coached by Lois Russ, finished with a 12-3 won loss record. Outstanding player award went to Tom Yellow Hair

Boys Track and Field  Record setters Bob Haas in the triple jump, Tom Yellow Hair in the two mile, and Dan Lliteras in the discus led the team. Lliteras was a district champ in his specialty, and finished 7th at state. Yellow Hair was a district runner-up and finished 9th at state in the two mile. The boys team won the Harrison Invite, and finished second at the Hay Springs Invite.  Other team members included Terry Messersmith, Tom Zajic, Doug Duncan, Doug Messersmith, and Dave Roes. Outstanding track award went to Tom Yellow Hair

Strange but True The science club sponsored the annual Penny Carnival, which featured a contest for the meanest teacher, and the meanest student , Carol Wood to be targets in the dunking tank. They raised $250! Judo was taught in PE by Mr. Russ, while Shorthand, taught by Mr. Knaub, was also still in vogue. Beginning swimming, business law, Motorcycle Driving lessons, and Humanities were also offerings for students.

Prom Theme Saturday at the Park, featuring a hedge made of napkins and painted tree murals.

Senior Class Motto  I cannot predict what I will be, I can only live what I am , Class Song, Do  You Know Where You're Going To  ( Theme from Mahogany) Class flower Red Rose. The Seniors sang Halls of Ivy at Graduation as well.

All Around Student Carol Wood

Other Awards Citizenship Pam Mazanec and Dudley Prochazka, Kim Hansen was the FHA president and pep club president, as well as finishing in the top 15 in the state on the Betty Crocker economics test.

Special or Unique Happenings A television production class was offered this year at Hemingford High.

Yearbook Dedication The yearbook was dedicated to the United States, with many pages devoted to the 200 year history of our country. The school also published The Feline , a student produced school newspaper.