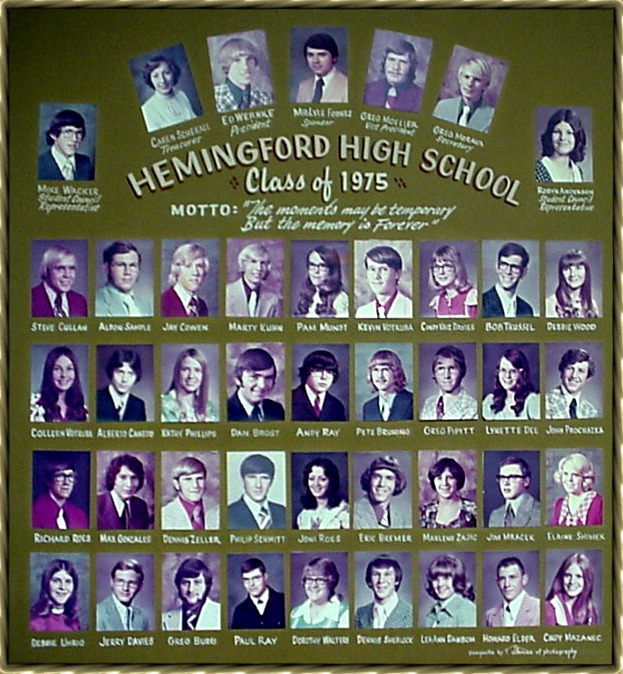 Student Council Highlights –  Together with faculty members, formed a student discipline board, and helped make posters informing the public about voting in the election to build the gym.

Music Department – Presented the operetta, “Christmas in Foreign Lands and at Home”, with sixth graders playing the parts of Mexicans, Norwegians, and Americans. Two concerts were given, with the “Mid-Winter” and “Pop” presented. Bob Haas was president, Caren Schekall Vice President of the Music Association for Director Joan Longmore. There were 54 students in chorus, led by Mr. Jim Miller.

Scenes from the 70's. The Class of 1975 (Please click on thumbnail to enlarge) 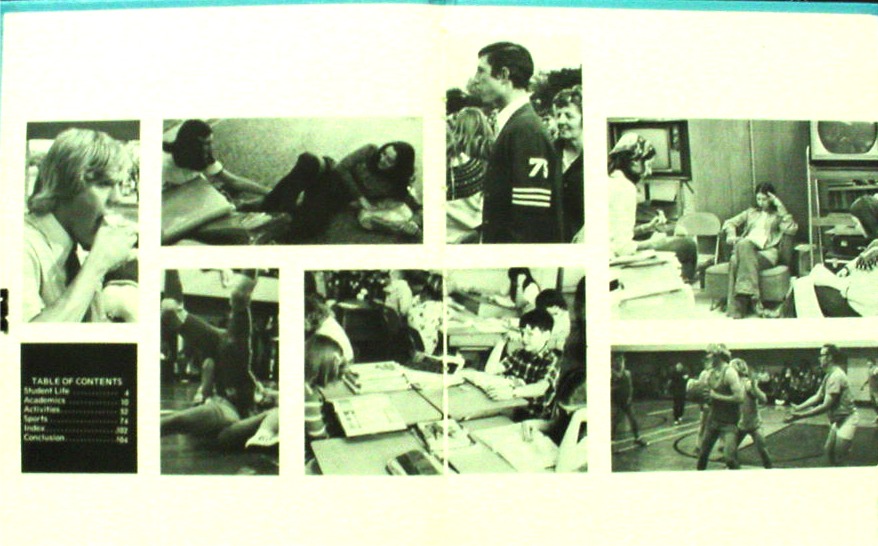 Launch the media gallery 3 player
Scenes from the 70's. The Class of 1975 (Please click on thumbnail to enlarge)

Football – Coach Dale Rien and the Bobcats were 2-6-1, with wins over Harrison and Crawford (Parent’s Night) Homecoming had a bittersweet flavor, with the Cats fighting to a 6-6 tie against Minatare. All Conference Honors went to Greg Moeller, Dennis Zeller, Jay Cowan, Steve Morava, Dudley Prochazka, and Dan Lliteras.  Assistant coach was Louis Russ.

Girls Basketball – Not featured in the yearbook - ???

Boys Basketball – Coach Rien and lettermen Steve Morava, Tom Yellow Hair, Max Gonzales, Ed Wernke, Dan Lliteras, Dennis Zeller, and Alberto Canedo finished with a 12-4 record, the best since 1962. Louis Russ was the assistant. The JV’s were  6-5, with the frosh 5-5. The Junior High Boys were undefeated at 7-0 in 7th grade, and 7-0 in 8th grade.

Clubs and Activities – Science Club purchased back packs and camping equipment from proceeds earned at the Science Club Carnival. Pep Club sponsored a pizza party and hosted the sports banquet at the end of the year. Varsity cheerleaders were: Kim Hansen, Carol Wood, Caren Schekall, Sheri Gordon, and Sue Schekall.

Homecoming Royalty – Queen was Colleen Votruba and King was John Prochazka. Attendents were Joni Roes, Debbie Wood, Greg Moeller, and Mike Wacker. “Moon Fire” provided the music for the dance, themed, “A Time For Us”.

Prom Theme –  “Rock Around The Clock”; Music was provided by  The Dynamics; A water fall and fountain were featured decorations.

Senior Class Motto –   “ The Moment May Be Temporary, But the Memory is Forever”,  Class Colors - Light Blue and Dark Blue; Class Flower – the Mum; The senior class donated money to the school to purchase a scorer’s table for the gym. 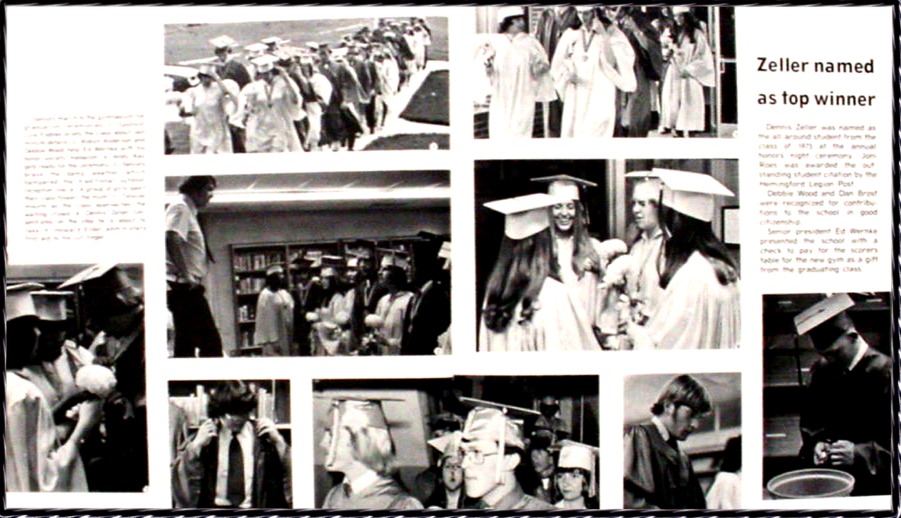 Junior Class Officers – President – Dan Duncan; VP – Doug Armstrong; Secretary – Kenny Darveau; Treasurer – Steve Morava. Sponsors were Mr. Bahn and Mrs. Headden. The class raffled off a turkey, given away at halftime during basketball season. The juniors also sponsored a sock hop after a home football game, and took care of the concession stand throughout the year.

Special or Unique Happenings – Back again, and drawing many throwers was “ The Meanest Teacher Dunking Contest”. Mr. O’Malia was the winner, with Ed Warnke and Colleen Votruba garnering “meanest students” awards.