The Class of 1986 Composite (Plese click on picture to enlarge) 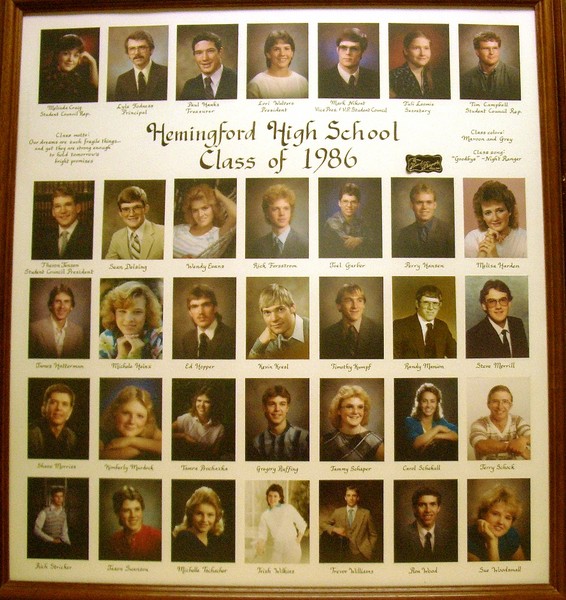 The Bobcat Band, under the direction of Sue Shaver, eagerly awaits the Girls State Basketball Game against Pierce in Lincoln (please click on picture to enlarge) 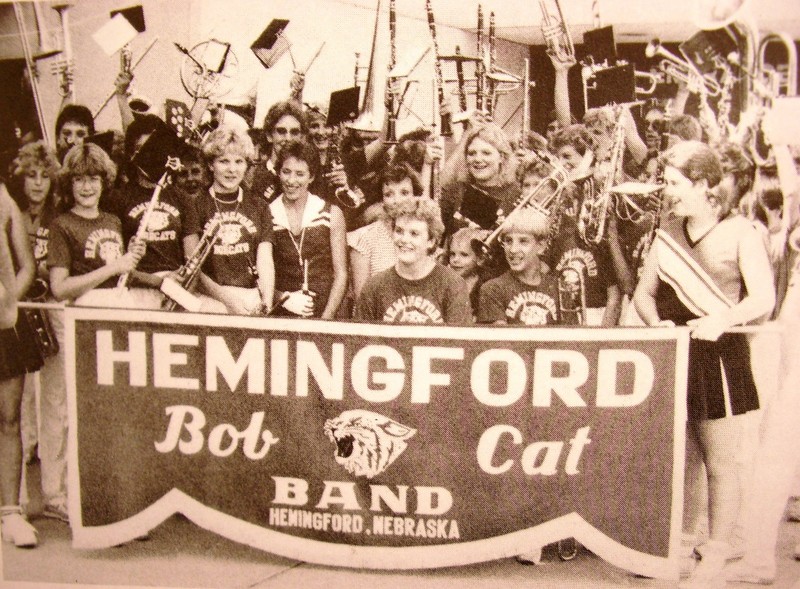 Launch the media gallery 2 player
The Bobcat Band, under the direction of Sue Shaver, eagerly awaits the Girls State Basketball Game against Pierce in Lincoln (please click on picture to enlarge)
Music Department  Mrs. Shaver and the Hemingford band traveled to Lincoln in September and performed at the Nebraska State Fair. They also attended an Alabama concert there and watched the Cornhuskers play visiting Florida State. Superior ratings at District Music Contest went to the flute duo of Brenda Reifschneider and Laura Specht, and the sax duet of Leeann Bruns and Tricia Klemke. The pep band also performed at the Girls State Basketball Tournament.  The Choir earned a superior at Districts, and the 59 member choir performed at Hemingfords Centennial celebration.

Drama and One Acts A cutting from The Curious Savage won an excellent rating at Districts, and the complete play was performed in the spring for the three act play. Students that participated in One Acts or Three Acts were awarded an H letter for the first time at Hemingford.

Speech Mrs. Lliteras was the sponsor, as a blizzard wiped out the District meet for Hemingford.

Football  Coach John Stanton’s Bobcats were 7-2 with wins over Martin, Guernsey, Red Cloud, Bridgeport, Morrill,  Rushville, and Kyle, including four shutouts. Only one team scored more than once, with Grant beating Hemingford 16-9 in the State C2 Play-offs.

Volleyball  The Lady Cats went7-11 for Coach Barb Zurn, including wins over fourth and first seeds Rushville and Bayard in Sub-Districts. Trish Laeger ,  Lori Walters, Tricia Turek, and Trish Wilkens were members of the Panhandle All-Conference Volleyball team. The freshmen Volleyball team, coached by Ms. Bieck, was 7-2 on the season.

Girls Basketball  Following a one point nail biter over Hershey at area finals, the Lady Cats Basketball team headed to state for the first time in school history! With a season record of 20-3, the Lady Cats of Coach John Stanton finished the season rated sixth in C1. Trish Laeger was a super state and all state Class C1 player, with Kim Murdock, Tricia Turek, and Lori Walters also being selected for area and all conference teams.

Boys Basketball  The boys were 13-5, with losses in four games coming to state rated C1 teams, and a one point loss to Class B Chadron.For the third year in a row, the Cats won the Panhandle Conference Tourney. Tim Campbell, Paul Hanks, Perry Hansen, Trevor Williams, and Ron Wood all made all area or all conference teams. Hanks was a second team All– Stater as well for Coach Tim Lanik. The  reserves, coached by Grant Campbell had an outstanding season, finishing 13-1.

Wrestling  The Matcats of Ed Planansky filled only eight of twelve weight classes , and had just three seniors this year. Finishing second at Mullen, and sending four wrestlers to the State Wrestling Meet were season highlights. Theron Jensen was the state 145 lb. runner-up, while Mark Nikont, 138, Mike Raben, 167, and Chris Baer, 132 also made it to Lincoln for Hemingford.

Girls Track and Field  New records were the order of the season for the girls as six were set or broken, including Jennifer Lilly in the 100 highs, Marcia Puita in the 1600, Laura Specht in the 300 Lows, Tricia Turek in the 3200, and Sue Woodsmall in the shot. The 4 x 800 relay team also set a record with team members Danette Jesperson, Cara Lohmeyer, Tricia Turek, and Lori Walters. The girls won the Hay Springs invite by four points over rival St. Agnes.

Boys Track and Field  Tim Laniks thinclads won three invitationals, including the Panhandle Conference meet. There were three state qualifiers for the boys, including Tim Campbell in the shot put, Paul Hanks in the high jump, and Randy Manion in the 100. Hanks placed third in Omaha in his specialty.

Prom Theme  The Band Scam performed at the Prom, with the theme of Tropical Paradise. The dance was held in the small gym, and the dinner was held in the basement of the Methodist Church. There were palm trees, fountains, and a setting sun.

Senior Class Motto  Our Dreams are such fragile things, and yet they are strong enough to hold tomorrows bright promises.  Class colors were maroon and grey, and the class song was Goodbye by Night Ranger. 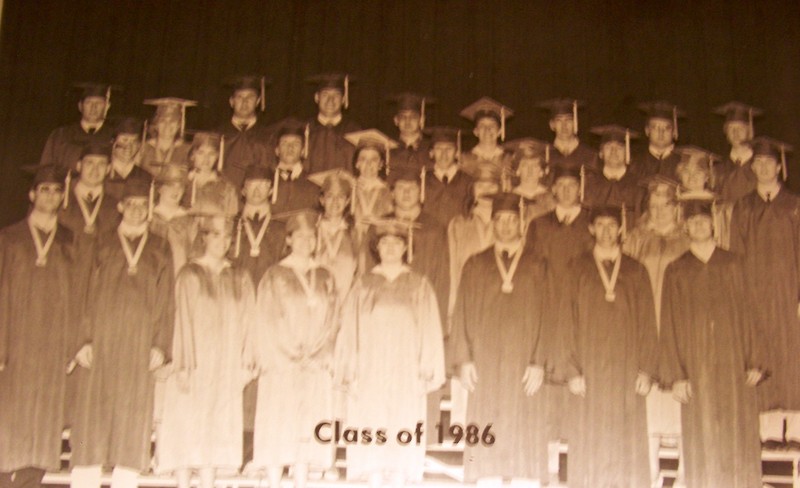