HHS Class of 2001 (Please click on thumbnail to enlarge) 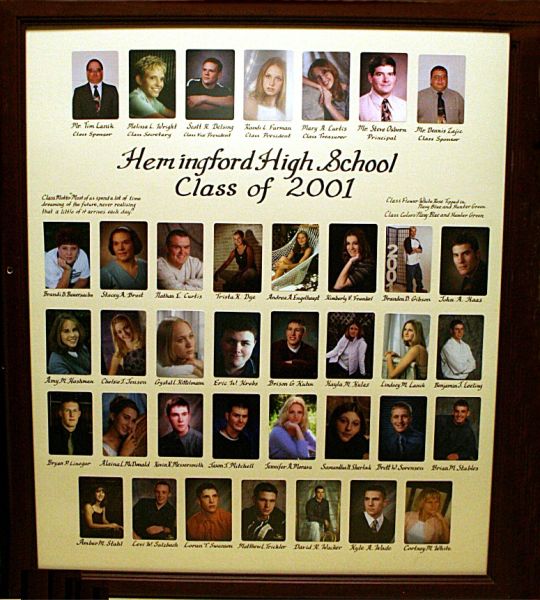 Student Council Highlights – The council put on the Homecoming dance with help from the cheerleaders and featured a skit involving coaches and athletes for a pep rally.  They donated some of their money to help the yearbook club.

Music Department – Kim Weideman directed and the Sing Choir, the Mens’ Rhapsody, Mixed Choir goup through a great year.  Honors given to Melissa Wright.  The marching band and jazz band also had a successful year under the direction of Kim Weideman.  Honors given to Bryan Linegar, Brandi Bauersachs, and Stacey Brost

Drama and One Acts – The Speech Team consisted of fourteen members, seven from the past year.  Mrs. Bridge honors seniors Jenny Morava and Amber Stahl.  Gary Henderson was awarded 4th place at State.  One Act – “How Does a Thing Like That Get Started?”

Football – The Bobcats ended the season strong as third in their district with an overall record of 4-5.

Volleyball – Coach Hucke and the Ladycats had an outstanding season with an ending record of 20-10.

Cross Country – Coach Cindy Lanik and her team ended the year by qualifying the boys.

Girls Basketball – The girls under the leadership of Coach Ziettlow finished their season with a 9-10 record.

Boys Basketball – The team ended the season with a 17-7 record.

Girls Track and Field – State qualifiers for the relay squad were Randi Furman, Shaina Giorgi, Paige Prochazka, and Melissa Wright under the leadership of Coach Ahrens.

Golf –The 18 members of the golf team advanced under the leadership of Coach Ziettlow.

Senior Class Motto –“Most of us spend a lot of time dreaming about the future, never realizing a little of it arrives each day.”