The Class of 2005 as First Graders! This picture courtesy of Mrs. Giorgi, Phys Ed Teacher. They haven't changed a bit! 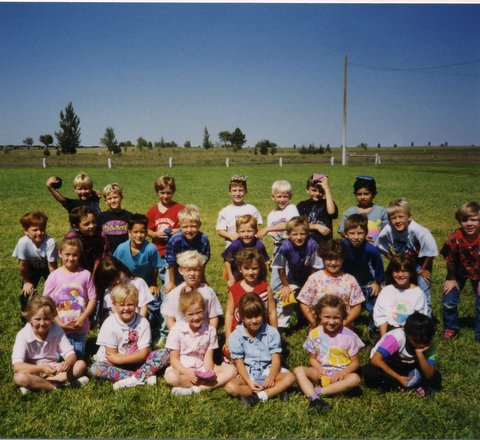 Launch the media gallery 1 player
The Class of 2005 as First Graders! This picture courtesy of Mrs. Giorgi, Phys Ed Teacher. They haven't changed a bit!

Student Council Highlights–  Led by co-presidents Lyndsie Ullrich and Ashley Roland, the Stuco raised the money, approved the planning, ordered and paid for the beautiful display case in the high school entrance hall. The student council also organized and ran homecoming week activities, planned student parking lot assignments, restarted the tradition of burning the “H” at football games, and were in charge of the weekly duty of updating the marquee in front of the school. The homecoming dance took on a more formal look this year as well, and lasted longer!

The new class composite has been hung with care! 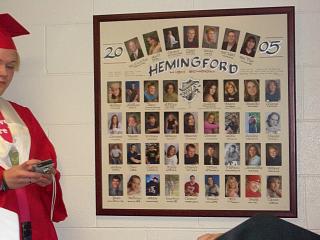 Launch the media gallery 2 player
The new class composite has been hung with care!

Music Department– District Music Contest continues to create butterflies in most of the stomachs of competing students and instructors. This year in the contest held at Valentine, the butterflies were quickly put to rest - at least for Music Instructor Kim Wiedeman and her troops, as eleven superior ratings were among those earned by Hemingford.

In her curtain call as music director, Mrs. Wiedeman and many seniors went out in style, garnering unanimous (all three judges gave their top rating) superiors in Concert Band, Jazz Band, and Swing Choir. Though Hemingford has a tradition of winning at least one such rating each of the last several years, (since 1997) it was the first time in four years (2001) that HHS had won the highest rating possible in all three large groups. Other top (superior) ratings went to Kayla Nesiba in Girls High Voice; Chevonne Forgey in Girls Medium Voice; Chevonne Forgey, Mary Moser, Kayla Nesiba, Jaimee Schumacher, and April Roes in Girls Quintet; Chevonne Forgey, Mary Moser, Kayla Nesiba, Jaimee Schumacher, April Roes, Carrie Long, Katie Frahm, Tammy Goldstedt, Jessica Votruba, and Melissa Cervantes in Girls Decatet. Instrumentally, superior ratings were also plentiful for Hemingford, with Jordan Haas earning a superior in his Tuba Solo, as well as Stephanie Savala, Melissa Cervantes, and Gina Jesperson in their Flute Trio; Lyndsie Ullrich, Britt Andersen, and Whitney Morava in their Clarinet Trio, and Taylor Jesperson, Ashley Roland, and Cassie Drake, and Brittany Shaver in their Brass Quartet. Earning a “good” rating were Jordan Haas and Kevin Brandt in their Tuba Duet; Todd Prochazka and Megan Roland in their Saxophone Duet; Melissa Cervantes in her Flute Solo; Becca Grant in her French Horn Solo; and Amanda Holman and Andrea Colson in their Clarinet Duet. Earning a three were Celena Fester and Melinda Prelle in their Clarinet Duet, and Adam Mckee, Nathan Craig, Brian Reed, and Stephen Stewart earned a four in Barbershop Quartet. Mrs. Wiedeman remarked that, “I am thrilled with the musicality of our students; I believe Hemingford made an outstanding showing for themselves this year. I will miss this excellence. The small groups did the best they have ever done during my tenure at Hemingford, thanks for the memories.” 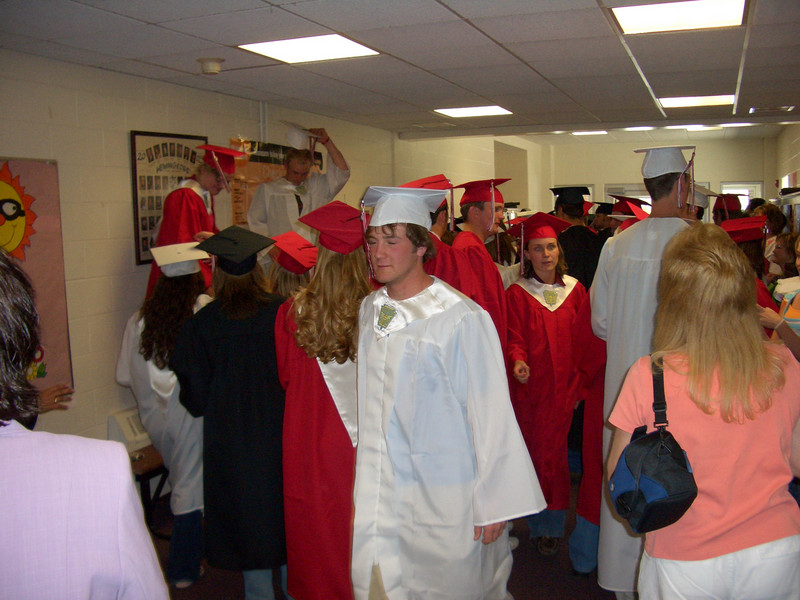 Launch the media gallery 3 player
It's cap and gown time for the Class of 2005!!

Football – The cats were district runner-ups and Western Trails Conference Runner-ups in 2004 for Coach Mo Hanks, assisted by Chris Watt and Darin Garfield, and played two rounds into the state play-offs, defeating last year’s (2003)  C2 State Champion Cambridge on a sunny afternoon, holding the Trojans out of the end zone on the games final plays. In the second round, the Cats lost to the 2004 C2 State Champions North Platte St. Pats, ending their season at 6-4. Victories came over Bayard, Bridgeport, Kimball, Creek Valley, Morrill, and Cambridge. Team Captails were Chase Engel, Dylan Petersen, Ryan Schledewitz, and Taryn Wood. First Team All Conference Honors went to Dane Armstrong, Chase Engel, Dylan Petersen, Lance Haas, and Ryan Schledewitz. Schledewitz was also selected as the offensive player of the year in the Western Conference, gaining 1,138 yards on the ground.! Honorable Mention awards went to Taryn Wood, Andy Kresl, and Kyle Campbell. All District awards were given to Armstrong, Engel, Petersen, Schledewitz, Wood, and Haas, while Honorable Mention All C2-10 District Honors were given to Kresl, Tanner Sherlock, and Jordan Haas. At the All State level, Ryan Schledewitz was selected as a defensive back on the Huskerland Prep First Team.

Girls Track and Field –The girls team was coached by Cindy Ahrens and was paced by Rindi Wood in the distances and Tori Towne in the throws. Both girls were state meet qualifiers as freshmen in 2004. Rindi won three individual events in the Panhandle Conference meet, taking the 800, the 1600, and the 3200! Amanda Winten, a sophomore placed in many meets as well this year, including Conference and Districts. Rindi Woods also qualified for the State Track meet in the 3200 meter run, and for the second straight year, placed second in class C! Rindi was the state runner-up in the 3200 her freshman and sophomore years, but will be moving to South Carolina with her family this summer.

Boys Track and Field –The boys team, coached by Tim Lanik, reigned as Panhandle Conference Champions, scoring over 200 points, and followed that performance two weeks later with Hemingford’s first ever Boy’s District Track Championship! School records in both hurdle events were reset this season, with Dylan Petersen holding the news highs mark at 14.7, and Chase Engel resetting his own lows mark at 39.5. Ryan Schledewitz won four gold medals in the Panhandle Conference meet, taking the 100, the 200, the 400, and anchoring the 4x400 meter relay to victory! As a team, the cat Thin-clads finished 2nd at Morrill, 2nd at the Bayard C-D meet; 2nd at the Gordon Invite; 6th at Western Trails; 4th at Chadron; Champions at Panhandle Conference in Chadron; 3rd at the Bayard B-C-D Invite, and District Champions at Mitchell. All conference honors went to Chase Engel, Joe Klahn, and Taryn Wood. State Track Qualifiers included Lance Haas in the 4 x 400 relay; Ryan Schlediwitz in the 100, 400, and 4 x 400 relay; Joe Klahn in the 1600 and the 3200; Chase Engel in the 300 Intermediate Hurdles and the 4 x 400 relay, and Dylan Petersen in the 110 Highs, the 300 Intermediates, and the 4 x 400 relay. Though there were no placers at the state meet, the boys had a great season! Joe Klahn, a junior, will be missed along with the seniors, as he plans to move to Thedford this summer.

Prom Theme –“Ever After”, Music and videos were provided by Live Wire Productions. A delicious dinner was held in the Parish Hall (Chicken Cordon Bleu with Rice Pilhaf) , followed by the Grand March and coronation at the fairgrounds. The decorations featured castles, a faux fountain, a balloon lined entrance, and a color theme of purple, white, and silver. Family members and other guests crowded the dance floor as the royal court was announced. The dance was followed by the after prom party in the high school gym. Thanks to all of the parents and donors for making that event a success.

Senior Class Motto - “What we call the beginning is often the end, and to make an end is to make a beginning. The end is where we start from.” Class colors were red, black and white; Class Flower was the Calla Lily, and the Class Song was “Pressin’ On”, by Relient K.