The 2006 Class Composite is hung with care in the main hall. 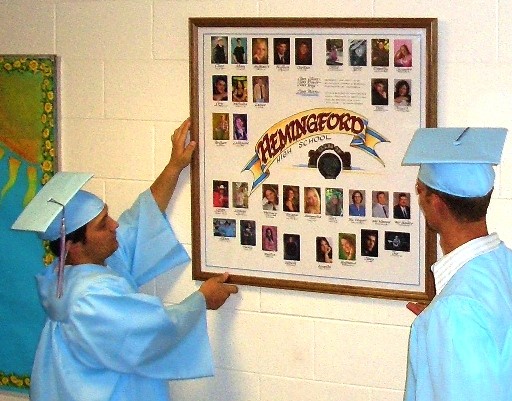 Launch the media gallery 1 player
The 2006 Class Composite is hung with care in the main hall.

The hats go flying
Student Council Highlights The student council collected books before Christmas to send them overseas to servicemen and women. They also collected money for the Hurricane Katrina recovery effort. The STUCOI also organized and ran a very successful homecoming celebration and dance.

Music Department The band pulled together under a new teacher, Mrs. Joss, and were able to earn superiors in Marching competition at Sidney and Scottsbluff. Mrs. Shaver took over the reins of the secondary vocal and instrumental groups after the first quarter, and a renewed effort was made. The band earned a superior at District Music Contest in Valentine, along with many solo and small groups earning superiors, including Choir Duet by Britt Anderson and Robyn Wright, Flute Duet by Melissa Cervantes and Gina Jesperson, Saxaphone Trio by Megan Roland, Kate Kaenow, and Todd Prochazka, and Solos by Jordan Haas with his Tba, and Robyn Wright in a vocal solo. Special thanks to Cortney White for her assistance as a substitute and as the director of choreography for the swing choir. 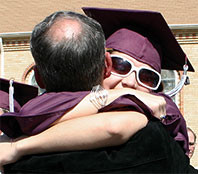 Volleyball The Lady Cats finished the season at 3-17, and with just fifteen players out, were short on depth this season. The Junior Varsity had a 14-5 record, so hopes for next season will be optimistic. Seniors were Sam Long,  Steph Sorensen, and Mallory Moeller. The Lady Cats were coached by Brad Olson and Lisa Janssen. The junior varsity finished with a 12-5 record.

Cross Country The bobcats had a total of 22 boys and girls out this year. Coach Cindy Lanik, even with a broken hip, worked together with assistant coach Tim Lanik to propel the boys to a championship in the Kimball Invite, a District Championship  (our school’s first ever) Cross Country is Number One!! Hemingford's Harriers traveled to Grant for D-4 District Championship action Thursday, and returned with some solid girl's performances, as well as a Boy's District Championship! Led by medalists Kory Rasmussen, 8th place, Mick Casey, 9th place, and Gabe Darveau's 13th place finish, the boy's team, which also included Beau Hartman and Tom Linegar finished first in the 18 team field. The boys went on to the state meet and finished third!

The girls team also ran well and finished in 7th place, paced by Kelsy Forgey, Briana Paris, Tori Towne, and Jenn Ruzicka. Congratulations to the entire team, including the junior varsity and the junior high members, who all worked together this season, pushing each other in practice.

Girls Basketball The Lady Cats, coached by Lannie Shelmadine and assisted by Lisa Janssen and Chris Watt, finished 9-7 on the year, with senior members Steph Sorensen, Briana Paris, Tori Towne, and Mallory Moeller. Season honors went to Shelby Campbell, Mallory Moeller, and Steph Sorensen. Sorensen and Moeller also played in summer all-star games in the panhandle. The Lady Cats won three games in a row early in the season and finished with four victories in their last six games. Lannie Shelmadine retired with his four seniors, with Dave Chatelain scheduled to take over the reins in 2006-07.

Boys Basketball Coach Tim Lanik and assistant Willie Uhing saw plenty of improvement throughout the 2006-2007 season in Boys Basketball. The Cats finished with just 5 wins, but were able to finish as runner-ups in the Panhandle Activity Conference Tourney, beating Hyannis and Hay Springs, before falling just six points short, 46-52 to Crawford for the Championship. Lance Haas, Paul Anderson, Colt Frahm, and Brody Roes earned individual honors at the season’s end.

Wrestling Wrestling Cats are Second at Districts. On Feb, 16 the Hemingford High School wrestling team traveled to North Platte for the D4 district competition.  Coach Karney had these words, “In the first round of competition the Hemingford boys wrestled up real well with only three losses in the round and a first place lead, closely followed by North Platte St. Pats. We carried this narrow lead all the way to the championship rounds where we fell a little short on wins. We went into the championship rounds with 10 wrestlers, North Platte only had seven. I would have liked to have seen our boys turn it up a little more in that final round and hope they realize that state competition will feature wrestlers of this quality from the beginning.”

The team has really come together and I would like to thank the seniors and team captains for the stand up job they did throughout the year to keep up team moral and maintain team discipline. Placing second at districts was a great coup and we owe a lot to these individuals for their part in accomplishing this task.

Clint McCrea, Blake Vela, Blake Fastnacht and Steven Overshiner can all thank Bridger Chytka for making them better wrestlers and helping them qualify for state. The 145 lb weight class was one of the toughest at the districts and Bridger lost his bid for a state qualifying match by a 0-2 decision in overtime.

Kyle Campbell ended the season at State by finishing fourth, while teammate Derek Harris finished fifth for the Cats.

Girls Track and Field Coach Cindy Ahrens had just five girls out for track, including Missy Riggs, Shelby Cambell, Tori Towne, Ashley Yardley, and Katrina Mundt. Campbell led the way for the thinclads, qualifying for state in both hurdle races. Tori Towne, the lone senior, placed in every meet in the throws during the season. Mo Hanks and Kay Horstman assisted both track teams.

Boys Track and Field The boys team, coached by Tim Lanik, sent the 4 x 100 team to state, where a false start kept them from placing. Members included Lance Haas, Matt Harris, Patrick Jesperson, Kyle Campbell, and Blake Vela. Other leaders were Mick Casey and Beau Hartman in the distances,  Todd Prochazka in the hurdles, and Brody Roes in the throws.

Senior Class Motto “It is a mistake to look too far ahead. The chain of destiny can only be grasped one link at a time” – Sir Winston Churchill. Class Song – “Photograph” by Nickelback; Class colors – Burgundy and light blue; Class Flower – White Rose tipped in Burgundy. Matt Faber and Carrie Long lead the seniors in. The swing choir performed “I Leave With This Song”.

Commencement An overflowing crowd helped to celebrate commencement exercises on Sunday in Hemingford on a sunny May afternoon. Ms. Peggy Thayer, Secondary principal at HHS proclaimed that the 30 members had all met requirements as set forth by the district 10 Board of Education. Bob Haas and Randy Dannar, members of the board presented diplomas and congratulated the members of this year's graduating class.

Stephen Stewart, this year's valedictorian, and Stephanie Sorensen, the Class Salutatorian addressed the crowd following a special retirement honor for Mr. Lannie Shelmadine of the HHS Guidance Department. He was introduced by Mr. Chris Watt of the Hemingford Faculty.

" Spirit of Hemingford High " Awards were given to former long-time teacher and principal, Lyle Fodnes, who now promotes the school in his position as photographer at the Hemingford Ledger; and to Lynn Weldon, long time custodian and confidant in the high school. They were introduced by the Class of 2006 President, Mallory Moeller, and the Class Vice-President, Briana Paris.

The HHS band, led by Mrs. Shaver played the traditional graduation entrance selection, "Pomp and Circumstance", and the Swing Choir also performed for the crowd later in the program

Class colors were burgundy and light blue, and the class marched out to the sounds of "Photograph", their senior song, performed by Nickelback.

The seniors received the large crowd on the front lawn on what was a beautiful spring day.

CSC Scholastic Contest Results Finished in the top ten the past three years, but a winter storm prevented Hemingford from attend this year.

Yearbook Dedication The theme for the yearbook was, “Through these eyes, I am……….”