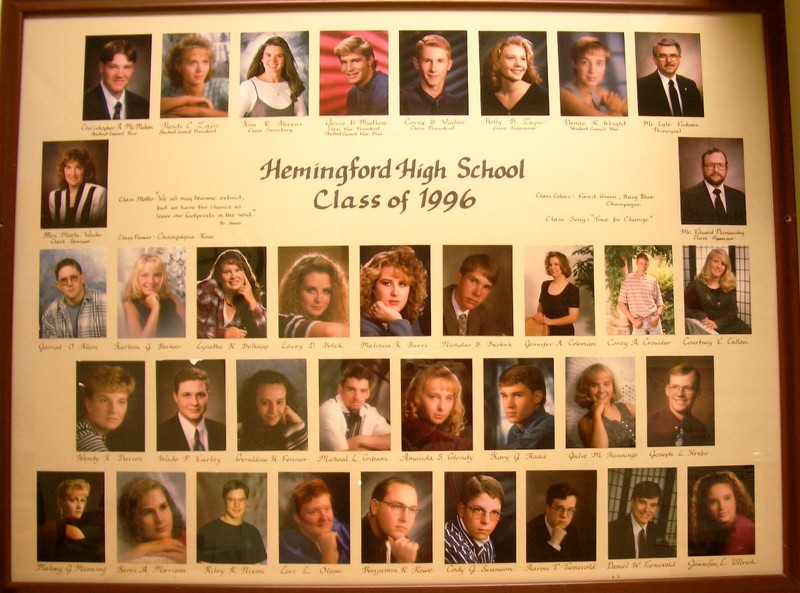 Student Council Highlights  Members helped to set up Computer Data Match Dates, helped with a community clean up project, helped award the VIP treats, and coordinated the surprise package from the district at Christmas.

The 1996 Prom at Hemingford High

Volleyball Coach Kay Horstman, in her fifth year at the Lady Cats helm, started the season 3-1, but faded to a 6-12 overall record. Team captain was Kim Ahrens. Holly Zajic, Sarah Moser, Katie Gettert, and Holly Reed were all class captains.

Prom Theme  A Knight to Remember, with a banquet at the United Methodist Church, and an after prom party. There was a long tunnel for the entrance, as well as a fountain, a flower garden, a gazebo, a large castle, and knights in shining armor! DJ Al played music for the dance.

Senior Class Motto Even though we all may become extinct, we all have a chance to leave our footprints in the sand, by Dr. Seuss; Class Flower was a champagne rose,  Class song was Time to Change by Motley Crue, and class colors were navy blue, hunter green, and champagne.

Special or Unique Happenings The senior slides did not arrive in time for graduation, and there were mistakes in the commencement program.