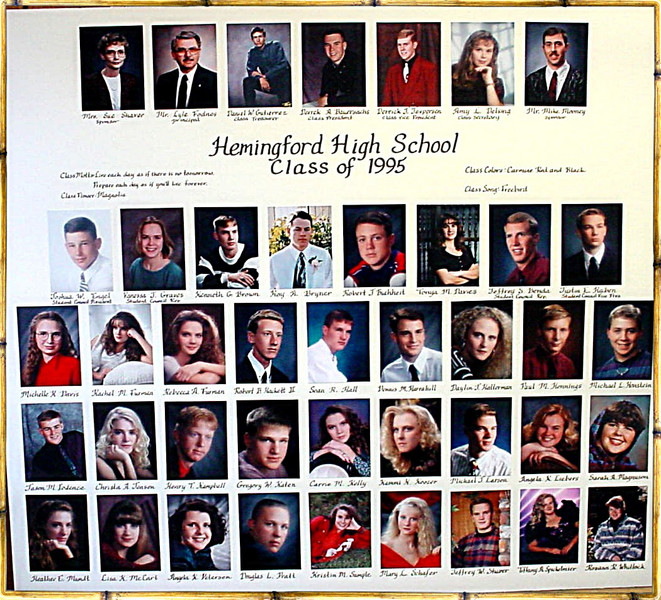 Student Council Highlights – Hosted both parent-teacher conferences; Fought for and won board approval to wear shorts to school!

Drama and One Acts – All school play was “ A Bad Year for Tomatoes”; One Act was , “ Why Do We Laugh?” Drama Club had twenty members for sponsor Lyle Fodnes.

Football – Coach Kurt Finkey shaved his head when the Cats broke a long losing streak, beating Morrill 21-14 in double overtime in the 1-7 season. Post game fireworks in the parking lot, and an appearance by TV station KDUH added to the festive atmosphere. Jason Iodence was selected all conference in football. Assistant coaches included Jeff Harris, Chris Mundt, and Mike Mooney. 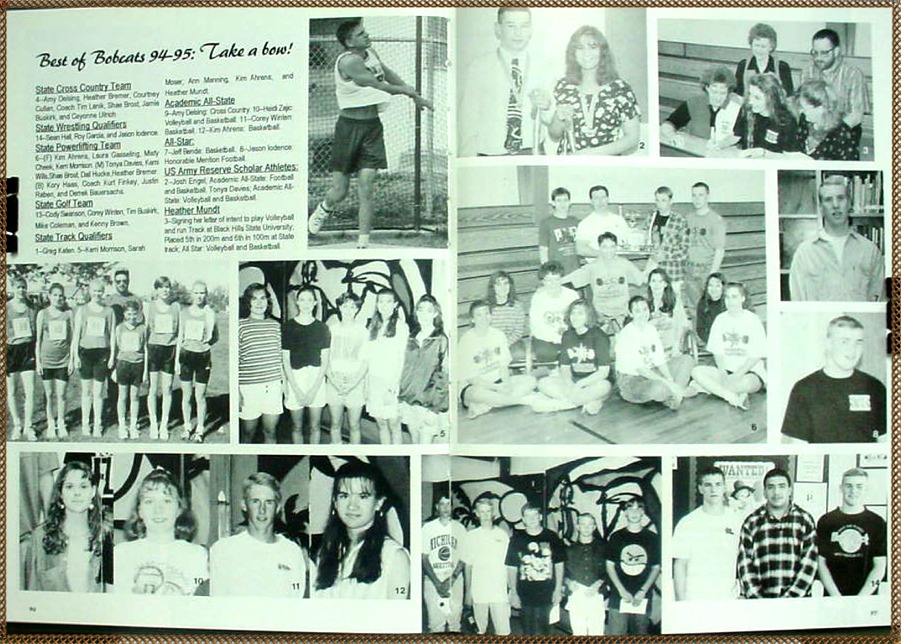 Boys Basketball – Coach Tim Lanik led the Cats to a 15-7 record, including a championship in the Bridgeport tourney and a runner-up finish in the Panhandle Conference Tourney. Seniors included Josh Engel, Jeff Benda, Derrick Jesperson, D.J. Pratt, and Michael Larson. Jeff Benda was selected to the all conference team. Mike Mooney and Ron Schmit.

Wrestling – 26 matmen, coached by Murph Planansky, won the Hemingford Invite, and finished second at Rushville. They were led by three state qualifiers, including Sean Hall at 140, Jason Iodence at 160, and Roy Garcia at 215. The Cats were 8-1 in duals. Dennis Zajic was the assistant coach for the cats.

Girls Track and Field –  Coach Cindy Ahrens led the first girls to ever medal from Hemingford in state track when Heather Mundt, Kerri Morrison, Kim Ahrens, and Ann Manning placed 4th in the 4 x 100 relay. Mundt also placed in the 200 and 100. The girls won the Bayard meet and the Panhandle Conference meet. Other girls with solid seasons were Brandi Chytka and Laura Gasseling.

Boys Track and Field – Discus thrower Greg Katen placed 11th at state for the cats, the only Boy’s qualifier. The Boys were runner-ups in the Panhandle Conference for Coach Tim Lanik. Other standouts included Josh Engel, Justin Raben, Jeff Benda, and Chris Koozer.

Clubs and Activities –  Students had a SALSA club – “Students against lack witted substance abuse”. Powerlifting, Speech team, FFA, and Future Leaders of America were clubs that were offered, as well as the Close-up trip to Washington. 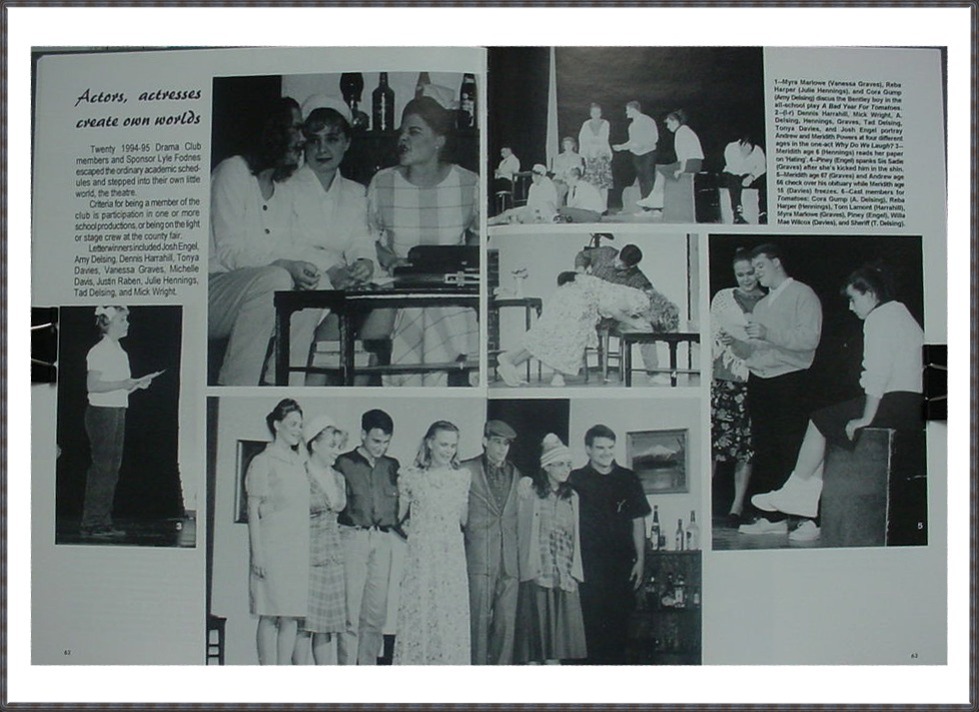 Homecoming Highlights – “Budget constraints and narrow hallways” contributed to a smaller amount of decorating for the “Flintstones” themed homecoming. King was Derrek Bauersachs and Queen was Heather Mundt.

Senior Class Motto – “Live each day as if there is no tomorrow, prepare each day as if you’ll live forever” Bob Hackett gave the invocation, Amy Delsing and Josh Engel gave the welcome and the farewell. “Arms of Love “ was sung by junior high singers Jessica Schledewitz and Sam Craig.

Valedictorian –  Not selected in 1995

Salutatorian – Not selected in 1995

Other Scholastic Honors – Megan Wernke, Shantel Early, Nate Lanik, and Anne Moser were the team champions in the Panhandle Mathcounts competition. (13 teams)  Cindy Ahrens and Alta Wright were the sponsors.

Yearbook Dedication – Dedicated to the “Big Man”, Superintendent Don Hanks, who had worked in Hemingford for 26 years and was retiring at the end of the year.