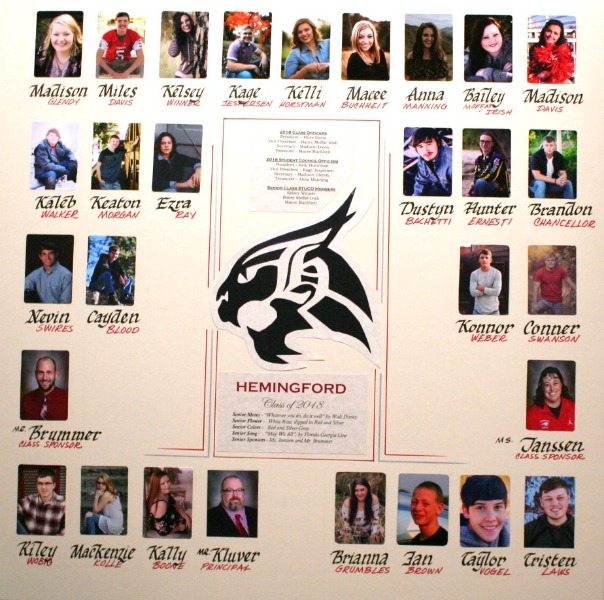 Homecoming, elections, special days for students and teachers, and the opportunity to put forth new ideas to our new principal were all part of the HHS STUCO in 2017-2018.

The cast and crew also celebrated their second Championship after winning at the North Platte High School Blue and Gold Invitational.

Madison Glendy made her way to the 2018 State Speech meet in Kearney because of a special season and District Meet! Other team members included Jacob Clouse, Mackenzie Glendy, Emma Gomez, Danea Hanson,  Rebecca Hanson, Emily Knote, Kylie Mendiola, Rashell Neefe, and Rachel Schekall. Some great expectations for the next few years are there for our speech teamers!

The Bobcats reigned as District Champion, the fourth title they’ve claimed in the last six years! The (7-3) record included a first round D1 State Play-off win against Overton, before finishing their season against strong foe Medicine Valley. WTC All Conference Honors went to Senior Miles Davis, who not only made first team, but was selected as the Special Teams MVP for the entire conference. Conner Swanson, Kage Jespersen, and Justin Davis were also first team WTC members, with Brandon Chancellor and Cade Payne earning Honorable Mention rank.

Hemingford was (12-18) on the season, but finished with two wins in their last four matches for a strong statement. All Conference First Team WTC Honors went to Lauren Gasseling and Kelli Horstman, while Anna Manning and Josie Stewart earned Honorable Mention Honors.

HHS had a full Boy’s team, and a single Female runner, Kelsey Winner. A standout on the Boy’s team was Jacob Clouse, a State Qualifier in 2016. As a team, the Boys finished in 2nd at Gordon, 3rd at Bridgeport, 4th at WTC and Bayard, and 5th at Kimball.

The Lady Cats were only (5-17) in the win/loss column, but upset (9-2) Sioux County after trailing by 15 points! Posr season honors went to Anna Manning, Kelli Horstman, and Lauren Gasseling. The girls finished third at the PAC Conference Tourney.

The boys had a (13-10) record, finishing in second place at the PAC Tourney. Outstanding players included Luke Cullan, Ezra Ray, Miles Davis, Brian Turek, and Aaron Farritor. The JV Boys Team had an outstanding (15-2) won/loss record for the year.

The Bobcats had two State Placers this season with Jaydon Walker taking 6th place in Omaha and Cade Payne finishing as State Runner-Up at Heavyweight. Also qualifying for State was Carter Buchheit, Tyler Coleman, and Jake Selmon. The team was very young and looks to return in 2018-19 as a Conference and District Championship challenger.

The HHS Thinclads had some great performances, including Casey Lashley in the hurdles, Brian Turek in the sprints and Brandon Chancellor in the throws.  The Bobcats were also Boys Panhandle Conference Team Champions !

Outstanding girls included  Kyla Walker in the sprints and Josie Stewart in the 300 lows and the Pole Vault;  Kelsey Winner also excelled  in the pole vault. The girls also captured conference championships  in the two short relays, with the foursome of Kelsey Winner, Josie Stewart, Makenzy Chancellor, and Kyla Walker sprinting to wins.

Another busy year and another group of hardworking kids!

Homecoming Royalty –
HHS crowned Homecoming Royalty this afternoon in the high school gym, with parents, patrons, faculty, and our entire student body as guests. King Kage Jespersen and Queen Anna Manning, along with Queen's attendants Macee Buchheit and Kelli Horstman, and King's Attendants Conner Swanson and Miles Davis were honored. What a great bunch of kids we're blessed with!!

Music for Prom 2018 was provided by Moore Music of Chadron.

Thanks to Val Bell and her assistants for putting on another great Post Prom!!!!

Senior Class Motto – “Whatever You Do, do it well” by Walt Disney; Senior Flowers were White roses, dipped in Red and Silver; Senior Colors were Red and Silver-Gray; The Senior song was, :”May We All” by Florida-0Geaorgia Line; and Senior Class Sponsors were Mr. Brummer and Ms. Janssen.

Special or Unique Happenings – A total eclipse enveloped Hemingford for a short time. Students, staff and area residents joined as one to safely observe this once in a lifetime event. Many out of town and out of state guests came to Hemingford and the surrounding area to camp and observe as well.

Annual Veteran’s Day Program – The American Legion Riders provided the colors as well as the James Berry Post 9 Legionnaires. Legion Chaplin Troy Sorensen gave the invocation, and Senior Kage Jespersen gave a welcome to the big crowd. A video interview was shared that featured Glen Deines of the U.S. Army, serving with the 38th Division of the 1st Cavalry. After a number of service songs by the choir tha crowd and our band, a flag was presented to Pat Mracek, Co-Chair of the Nebraska Honor and Remember Chapter. After the colors were retired, Senior Baily Irish offered a thank you and the dismissal. Thank you to Brenda Davies, Tammy Davies, and Heather Kresl for coordinating the event.

Mr. Tom Love, a delightful gentleman who drove HHS students to Scottsbluff for classes, passed away late in the winter of 2018. He had a kind spirit and will be missed.