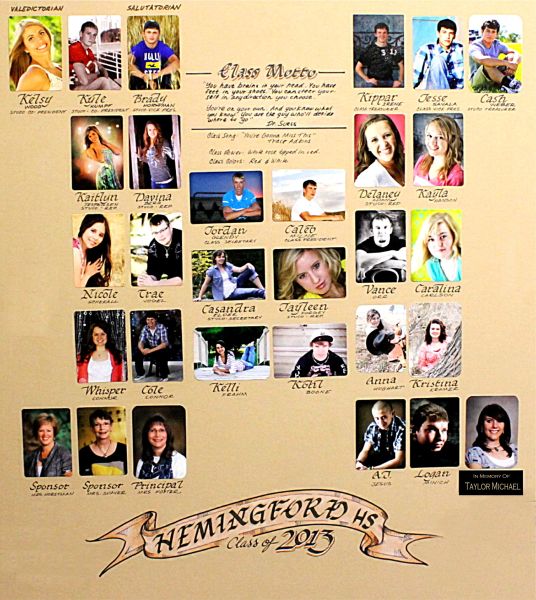 Kyle Kumpf, Kelsy Wood, Brady Horstman, Kaitlyn Jespersen, and Annie Hughart  were all Senior members of the NHS that graduated in 2013.

Officers, standing members, and new members pose in the library.

New Inductees in the Hemingford Chapter of the National Honor Society.

Music Instructor Sara Schmidt, a graduate of CSC welcomed large numbers in Choir, and hoped that the band would grow. The band marched in the Box Butte County parade to kick their year off. 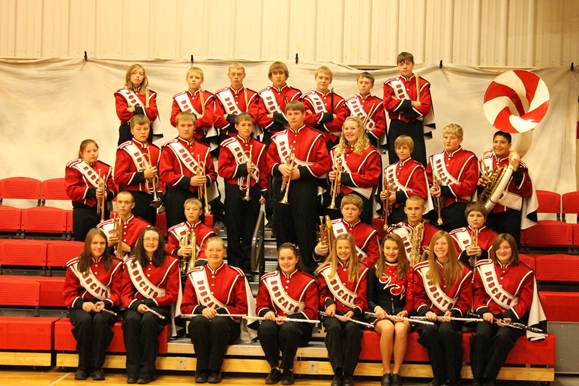 Drama and One Acts

Participation and enjoyment was the primary focus for the plays presented this year at HHS. One Acts garnered a runner-up finish at Panhandle Activities Conference 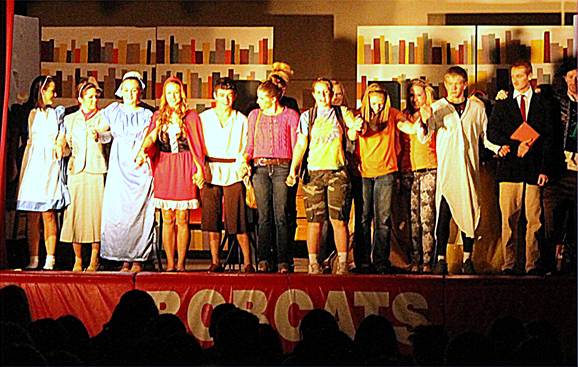 The season includes meets at Kimball for WTC, at Scottsbluff, Gordon, Gering, Chadron, North Platte, and Ogallala with Hemingford playing host to the Panhandle Conference meet, before Districts and Speech

Hemingford had a record-setting Football Season that saw the Bobcats Reign as Panhandle Activities Conference Champions as well as NSAA District D1-10 Champions! The Cats qualified for the NSAA State Football Play-offs as well, winning their first round game vs. Clearwater-Orchard, before dropping their second-round game in the play-offs to a good Loup City Team. 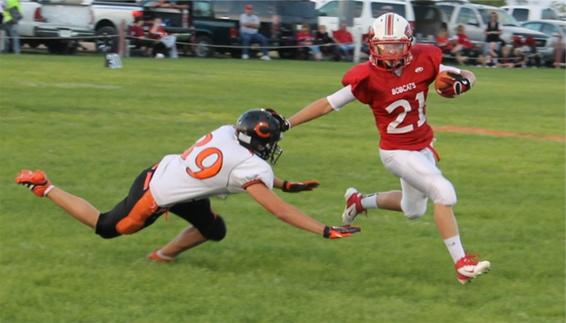 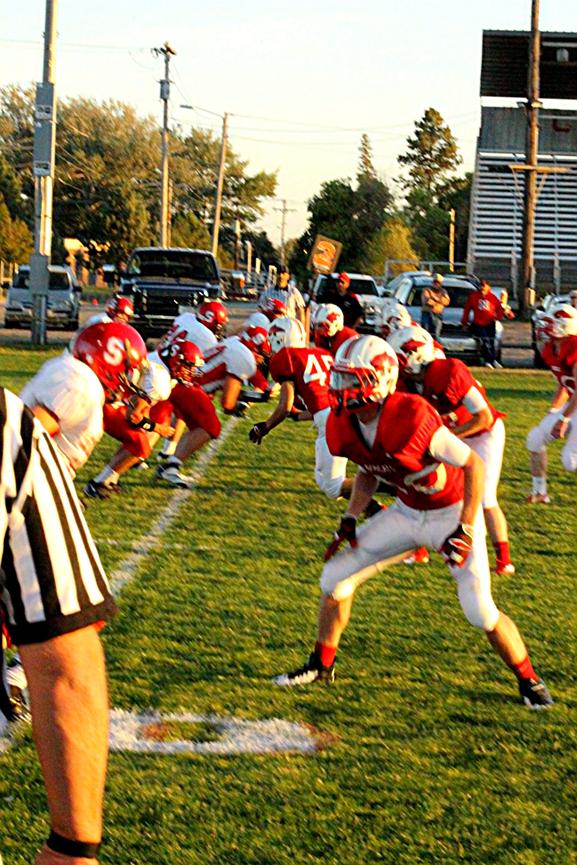 Kerri Heusman and Heather Steggs guided the Lady Cat Volleyball team in the Fall of 2012, earning wins over Sioux County, Crawford, Hay Springs, Edgemont, Banner County, Minatare, and Bennett County on the way to a (14-14) Won-Loss record. The Lady Cats earned third place in the Hemingford Invite and the PAC Tourney for season highlights.

Senior Kelsy Wood gets up high for a block. 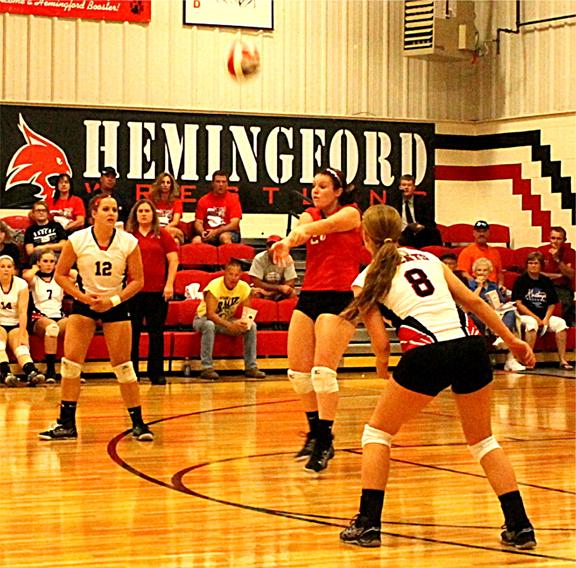 Senior Jesse Savala looks to overtake a runner from Morrill during one of our chillier meets.

The Girls BB team worked very hard, earning several wins against teams in the PAC and WTC. Coach Dave Chatelain led the Ladies to a (14-8) Win-Loss record in 2012-2013. They earned runner-up honors in the PAC and in the Sub-District Tourey. All-Conference Honors went to Kelsy Wood Cali Rohrbouck, Kaitlyn Bergfield, and Kaitlyn Jespersen. 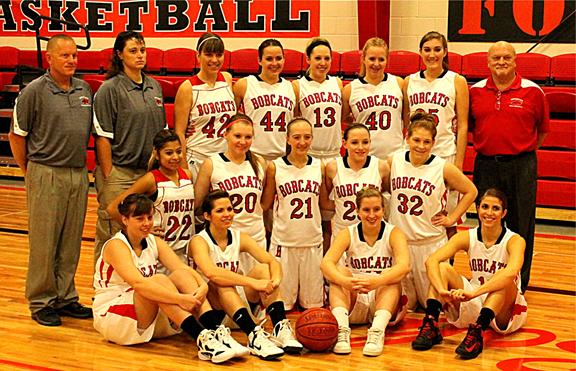 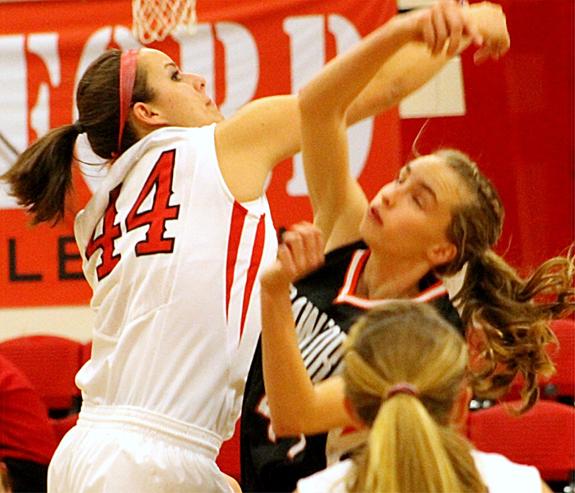 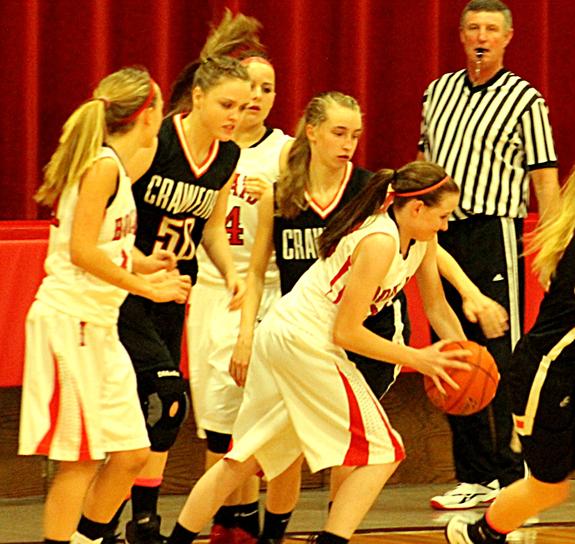 Conference Champions in the PAC, Sub-District winners, and District Runner-Ups for the first time in over 20 years were some of the most memorable highlights for the Bobcat Basketball team, Coached by Randy Hiemstra. The Cats had a great season, finishing with a (19-6) won-loss record. 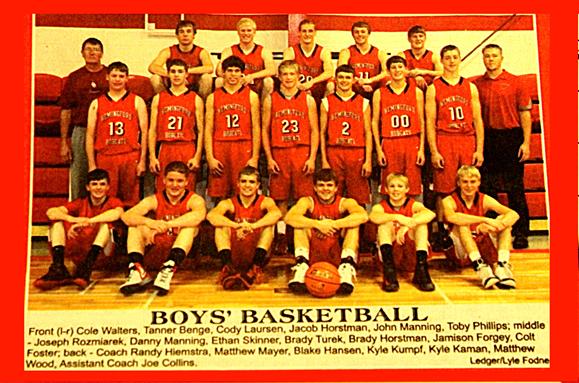 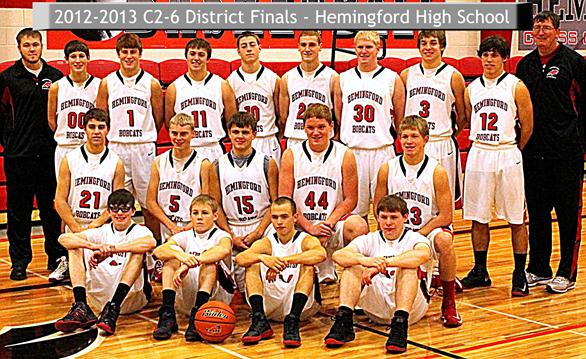 The Cats had a resurgence in team numbers, with ten mat men out this year. Several highlights included good showings at Conference and Districts, where three Cats qualified for the State Wrestling meet for Coach Kyle Walker.

Senior Cash Weber, little brother Cooper Weber (a freshman), and freshman Lee Jespersen all made it to Omaha. Cooper and Cash were both able to win a match in the always tough State Tourney.

Injuries slowed the elder Weber, Trevor Benge, Matthew Sorensen, and Tyler Huddle, who except for Weber look to return in great shape for 2013-2014. Other promising team members included Moses Ash and Wyatt Stricker. 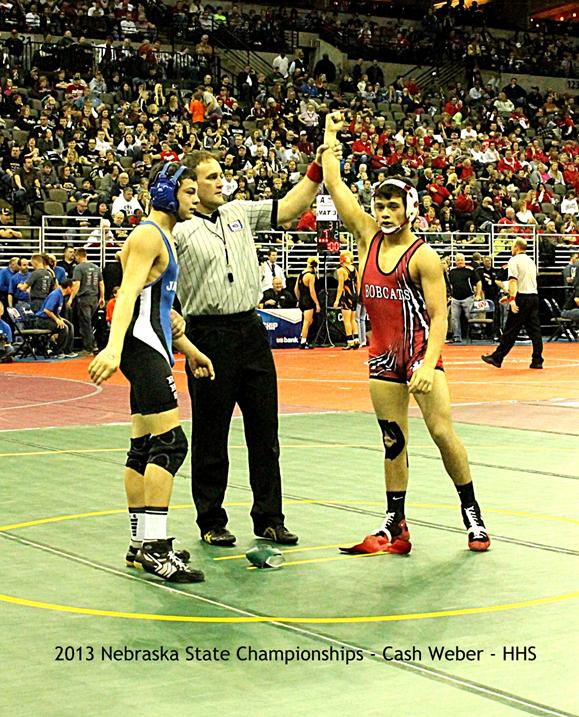 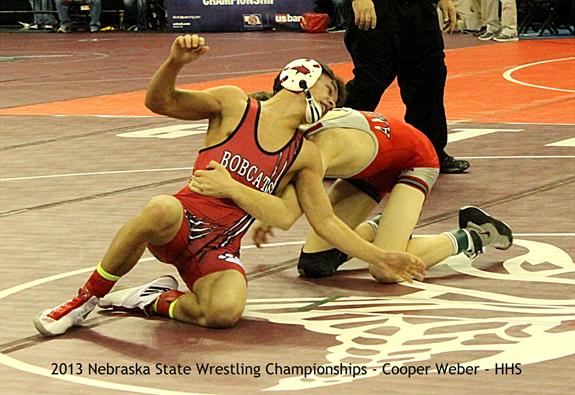 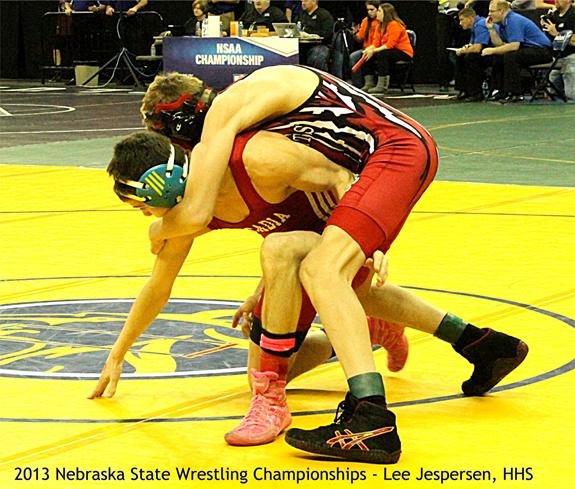 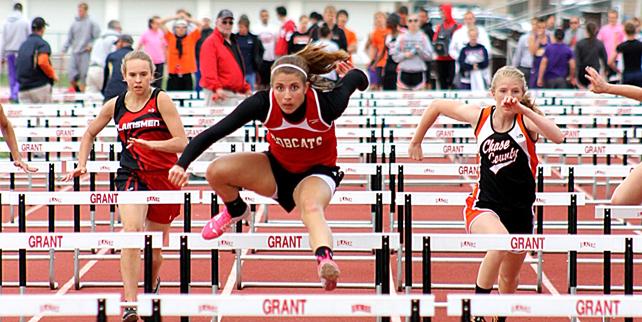 The boyâs golf team had weather problems that kept them off the links two or three meets, but managed to trample the field at the PAC conference meet in Alliance, winning by nearly forty strokes. Medalist for the PAC meet was HHS freshman Jacob Horstman, followed by big brother Brady, who finished in fifth place.

Another significant highlight was at the District meet in Sidney, where the Bobcats won the schoolâs First Ever District Golf Championship, also qualifying for the State Golf meet in Kearney!

Mr. Joe Collins was the Golf Coach for HHS.

A great group of hard-working girls led the cheers and the spirit for Hemingford in 2012-2013.  Delaney Adam and Davina Berg were the Senior Leaders for HHS; Underclassmen were Tegan Yardley, Kaelia Nelson, McKayla Grumbles, Hannah Fessler, Becca Stone, Taeller Ansley, and Danika Adam. Sponsors were Laura Weber and Amy Yardley

The Hemingford Chapter of the FFA conducted many activities throughout the school year, including area, district, and State contests, as well as Farm Safety Day and the Annual FFA Appreciation Banquet. 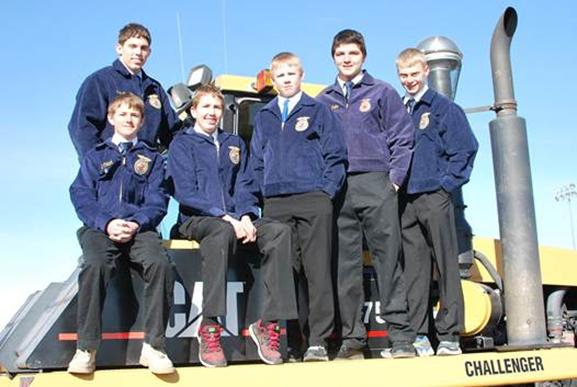 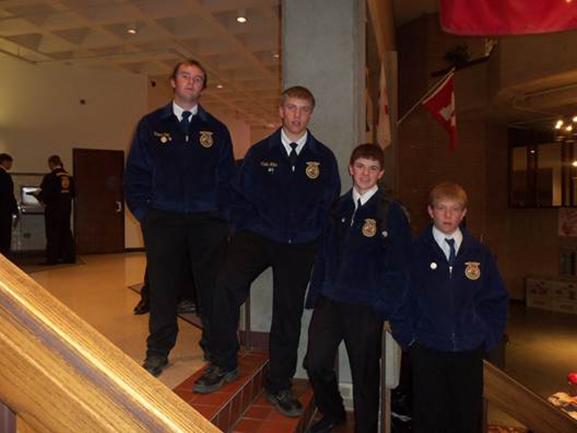 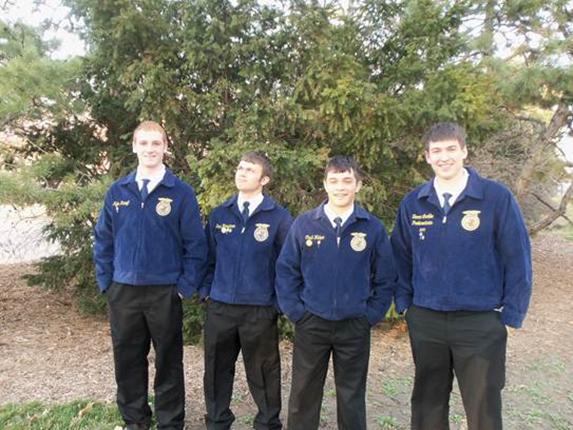 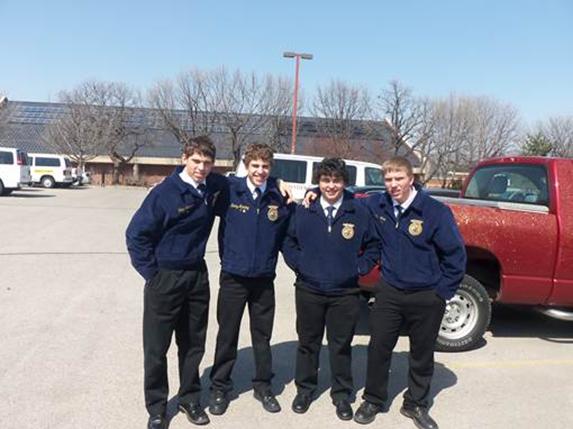 Along with competing at the convention members had the opportunity to attend leadership training sessions and act as delegates for the chapter at business meetings.

State FCCLA Conference in Lincoln will not only be remembered for the extra days spent in Lincoln waiting for bad weather and roads to improve, but for the awards earned by Hemingford High School students.

Winning a silver in Culinary Arts were Kaitlyn Jespersen, Kelsy Wood, and Matthew Mayer; A gold went to Jesse Savala in Food Art;  and a gold went to Mikayla Randolph and Madi Glendy in Family Challenges and Issues, including a rating of Second Place in State!

For perhaps the first time in history, Hemingford students also won the âTop Goldâ award in National Programs in Action. Taylee Neefe and Allie Mekolon qualified for the National FCCLA Conference with this win.

Congratulations to all of the Hemingford High School FCCLA students and to Chapter Sponsor Suzanne Neefe. Fundraising activities are slated to help offset the cost of attending the National Conference for Taylee and Allie and their sponsor. 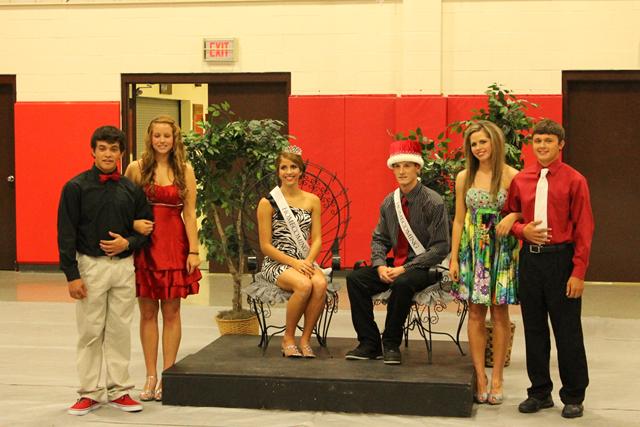 This resulted in having  Homecoming festivities, including the  parade, dress up days, and the annual Homecoming dance during the second week of classes! 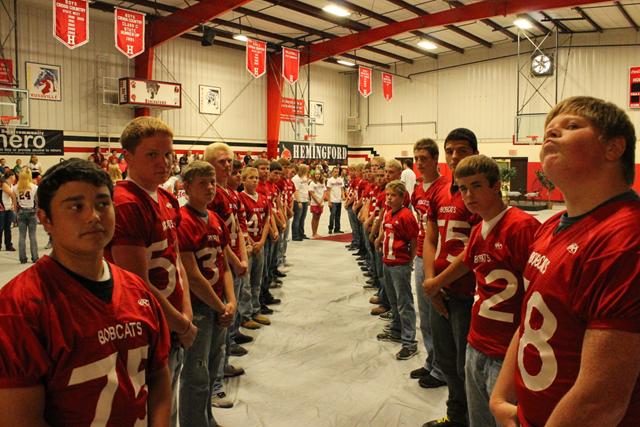 The combination of away games in the middle and end of the season, and the dearth of weeks where both the Volleyball and Football teams had home games the same week resulted in this strange occurance. 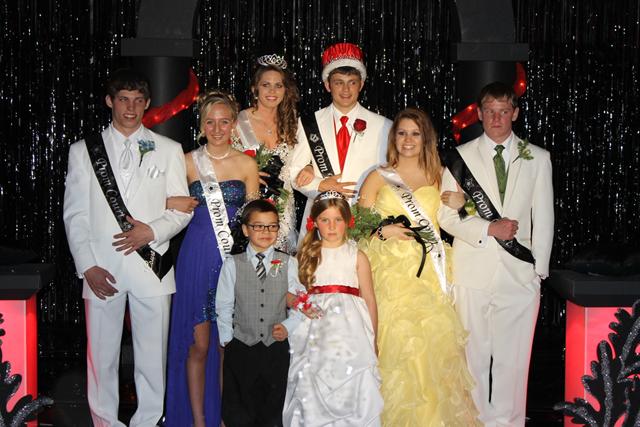 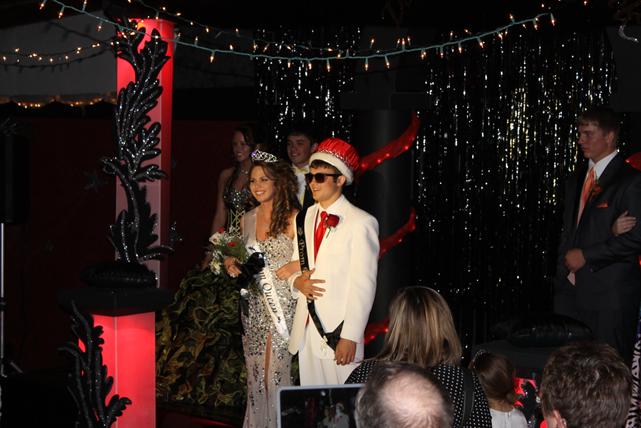 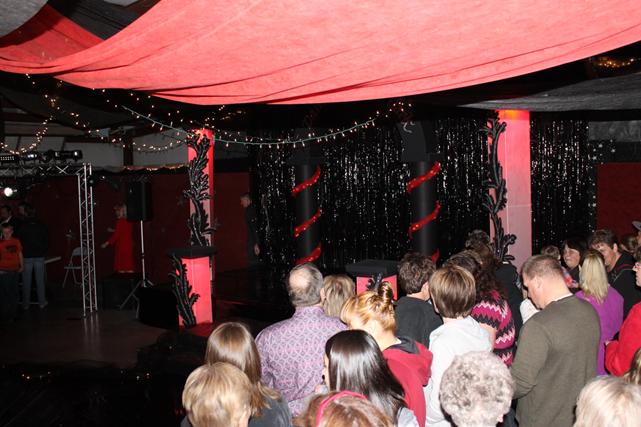 The 2013 Prom DÃ©cor was outstanding. 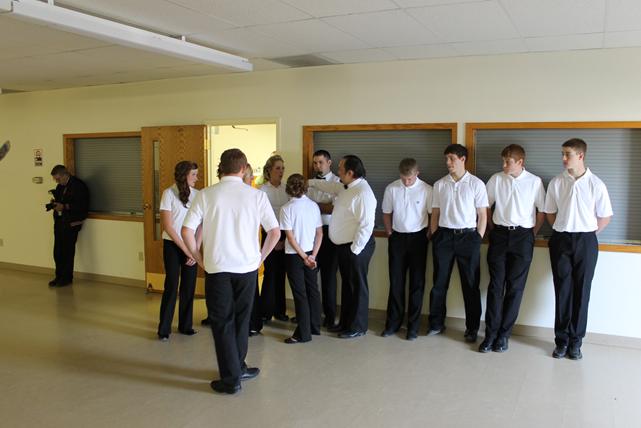 The Sophomore Servers await their call to duty.

âYou have brains in your head. You have feet in your shoes. You can steer yourself in any direction you choose. Youâre on your own, and you know what you know. You are the guy whoâll decide where to go.â Dr. Suess

Dawes, Box Butte, and Sheridan Counties all suffered from lack of rain and snowfall (until May, 2013), and as a result there were wide-spread fires that took thousands of acres of crop land, grazing land, and forested areas.

There were Twenty-Six HHS Seniors in the Spring of 2013 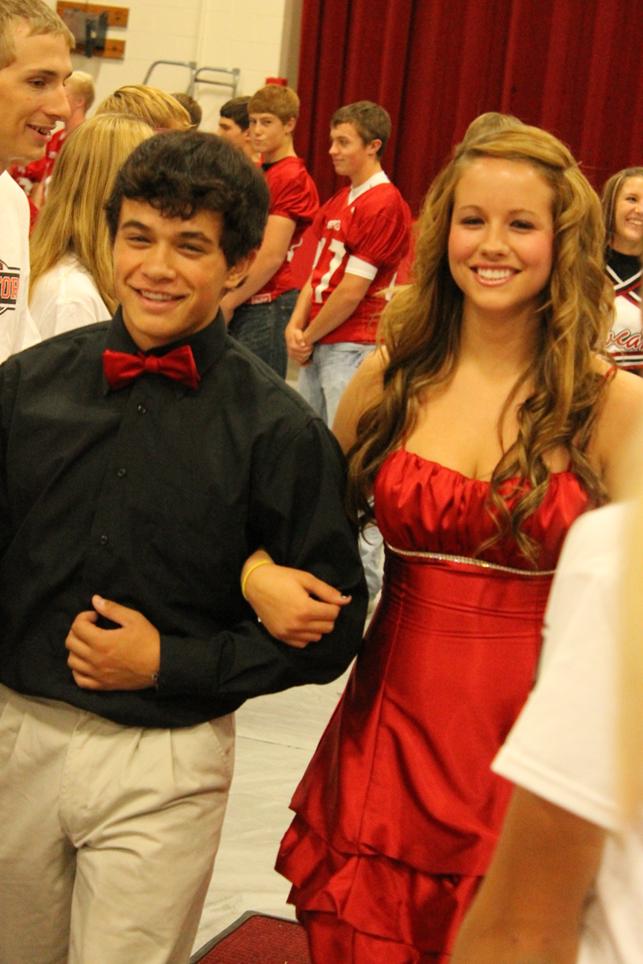 Hemingford had twenty-one Kindergarteners in 2012-2013

Tim Lanik, Secondary Science and Activities Director, and Gina Benda, Elementary Computers and Tech Coordinator retired at the end of the year after decades of high value service to the Hemingford Community and itâs students.