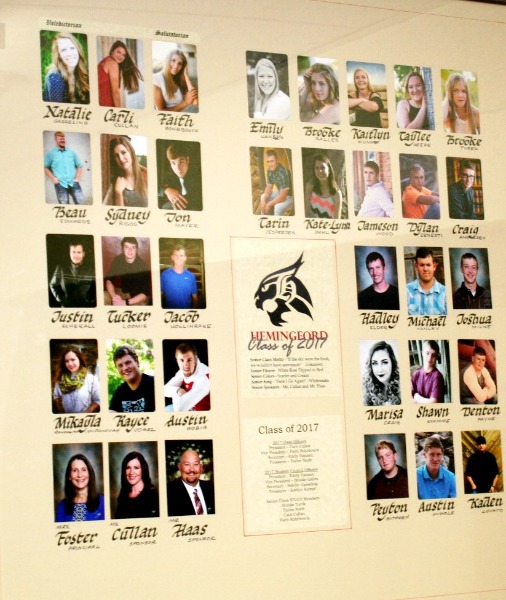 Student Council Highlights – Another tremendous week of Homecoming thanks to the STUCO, along with leadership in the halls and classrooms all year long! Thanks to the over and above efforts by Sponsor Kay Horstman! She is one in a million! Officers - President – Emily Hansen; Vice President – Brooke Galles; Secretary – Natalie Gasseling, and Treasurer – Kaitlyn Kumpf

Cross Country – Coach Cindy Lanik, assisted by Coach Jamie Nunes saw some strong growth through the season, and had a freshman state qualifier in Jacob Clouse in 2016.

Girls Basketball – Coach Steve Morava and Assistant Lisa Janssen worked in concert with a talented group of seniors including Brooke Turek, who now holds the Girls Basketball Career Scoring record at HHS with 1,245 points! Put that together with 1,000 point scorer Natalie Gasseling, and 1,000 scorer Faith Rohrbouck! Not to mention Emily Hansen and Kaitlyn Kumpf who also led the program for the past four years! The Ladies were Panhandle Conference Champions once again, winning Sub-Districts, and finishing second in the WTC and District C2-6.  First Team All Conference awards in the WTC went to Brooke Turek, Faith Rohrbouck, and Natalie Gasseling. Honorable mention awards went to Kaitlyn Kumpf and Emily Hansen.

Wrestling – Head Coach Pete Gomez was assisted by Scott Delsing, and though four former state qualifiers were sidelined by injury, and unavailable, the Cats relied on a youth movement to fill many weight slots in 2017. Senior Denton Payne returned to the team and led the way with younger brother Cade, Freshman Jaydon Walker and sophomore Justin Davis in placing or winning many meets during the season. Districts were at Sutherland in 2017. Justin Davis won three matches at the State Tourney, placing sixth. Other State Meet Qualifiers were Cade Payne, Denton Payne, Jaydon Walker, and Dylan Ernesti. First Team All-Conference awards in the WTC went to Justin Davis,
Dylan Ernesti, Jake Sellman, and Cade Payne. Jaydon Walker earned Honorable mention status.

Girls Track and Field – Head Coach was Randy Heimstra, assisted by Lisa Janssen, Jacob Brummer, and Jayme Nunes. Team leaders included Senior Emily Hansen in the throws and Freshman Jori Stewart in the Low Hurdles. Stewart finished as District Runner-Up in the Low Hurdles with an outstanding time of 47.2, qualifying for the 2017 Nebraska State Track meet in Omaha.

Boys Track and Field – Head Coach was were Randy Heimstra, assisted by Lisa Janssen, Jacob Brummer, and Jayme Nunes. Team Leaders included Casey Lashley in the High and Low Hurdles, and Dylan Ernesti in the 100 and the Long Jump. Ernesti broke the HHS School Record in the Long Jump, going 21’9.5” at Districts, where he was the runner-up. He qualified for the State Track Meet in that event, as well as in the 4x100 Relay, which ran a 44.7 to finish third at Districts in Mitchell. Other relay members advancing to the State Meet in Omaha were Jameson Wood, Jon Mayer, and Konnor Weber! Dylan Ernesti placed fifth at State in Class “C” !

FCCLA- At the Denver Cluster in the Fall, Rashell Neefe won first in Junior Impromtu Speaking, while sister Taylee Neefe won fourth place in the Senior Division. Both Neefe sisters won State FCCLA Championships in April in Lincoln, qualifying them for the National Convention in Nashville.

Journalism- Only the BEST group of writers and photogs ever!

Cheerleading – Sponsor Mrs. Weber had the seven girls practicing  non-stop to get them to perform their best.

Prom Theme – “Masquerade Ball”, Dinner was served in the Red Zone, the Dance was in the Multi-Purpose Hall

Senior Class Motto – “If the sky were the limit, we wouldn’t have astronauts” - Unknown

Graduation – Board member Troy Turek welcomed the overflow crowd, and Mrs. Foster was honored with her husband for the many years they had served as our principals. Carli Cullan and Jameson Wood gave the Senior welcome, the crowd enjoyed the annual video show, followed by a farewell from Brooke Galles and Taylee Neefe. A highlight was the comedic duo of Emily Hansen and Kaitlyn Kumpf who presented Senior memories.

Special or Unique Happenings – Two snow days in late January kept students home while drifts of heavy snow piled up in and around Hemingford. August 21st promised to be special, with a total Solar Eclipse expected on the 21st of August, 2017. Hemingford will be one of the most sought out destinations in our country for the event, due to clear skies and one of the longest durations of the event.