Hemingford High School Class of 2010 (Click on Thumbnail to enlarge) 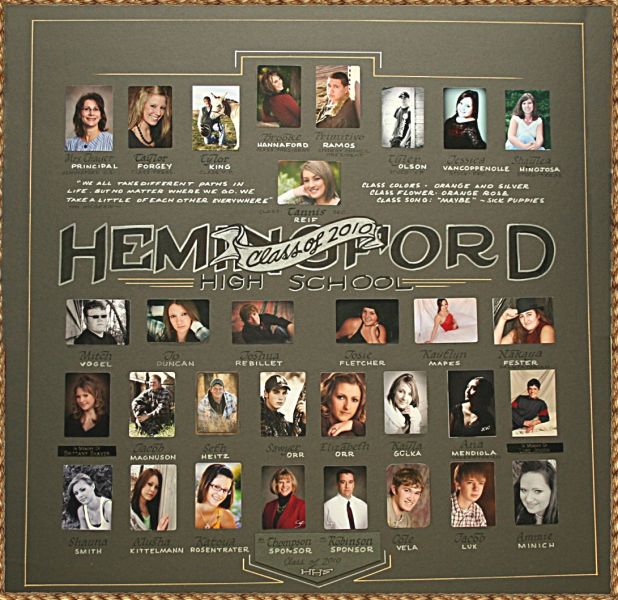 The student Council was very active, beginning with their duties for organizing homecoming. Cathy Fingar was the STUCO sponsor

Instructor Ann Chesley sponsored Choir, and the band, as well as music classes K-12. The band marched in the Box Butte County parade to kick their year off. The Chamber Choir earned a superior rating at District Music, while both the Chamber Choir and Swing Choir finished first at Panhandle Conference. Katoya Rosentrator, Bethany Wacker, Mindy Gibbons, and Emily Sample were selected to the Western Trails Honor Choir. Sha-Nae Orr, Bethany Wacker, Luchia Sicari, Emily Sample, and Kaitlyn Jespersen were selected to the WTC honor Band.

Drama - One Acts and Three Acts

Head Coaches Patrick Robinson along with Assistants Joe Collins and Randy Hiemstra led the Bobcats to a 5-3 won-loss record. The gridders claimed victories over Edgemont 34-8; Banner County by a 52-11 score; Leyton 58-6; Potter-Dix 58-12, and Creek Valley 68-38 in an offensive shootout. The Junior Varsity finished the season with a 1-3 record, while the Junior High won 3 of 4 games, scoring over 60 points in each win!

Coached by Lisa Janssen, and assisted by Kendra Bixby, the Lady Cats were 7-20.in varsity matches, and 8-8 in Junior Varsity action.  Varsity wins came over Kimball (2), Bayard, (2), Sioux County (2), and Edgemont. Though they lost Brooke Foster to injury, the girls beat Kimball and played a close game against Gordon-Rushville to highlight the early season.

The Lady Cats  finished third at PAC,  and had post-season all-conference honors go to Tannis Reif, Taylor Forgey, and Brooke Hannaford. The 7th Grade team had a 4-4 record, with the 8th Graders finishing 7-5.

Coach Cindy Lanik and Assistant Tim Lanik  had impressive efforts from Freshman Jesse Savala and Junior Baily Woods in 2009.  Woods qualified for her third consecutive State Meet in Kearney to lead the squad of  ten runners.

The Lady Cats were coached by Dave Chatelain and assisted by Lisa Janssen and Steve Morava. The Junior High girls were 9-6, the Junior  Varsity Girls were 9-8, and the Varsity finished 10-12.

The Big Cats were coached by Randy Hiemstra and assisted by Joe Collins. The team finished with a 12-12 recoprd, the best in many years. The JV boys had a 3-14 record, but the Junior High Boys dropped only one game, won two tourements, and fished with an outstanding 16-1 record.

Shelly McConville and Suzanne Neefe were the sponsors.

FFA – Gordon Karney was the sponsor.

Mrs. Horstman was the sponsor;

“We all take different paths in life, but no matter where we go, we take a little bit of each other everywhere” (Tim McGraw);

“Maybe”, by the Sick Puppies.

Two members of the class of 2010 passed away much too soon, Brittany Shaver and Luke Jensen

Board of Education Members