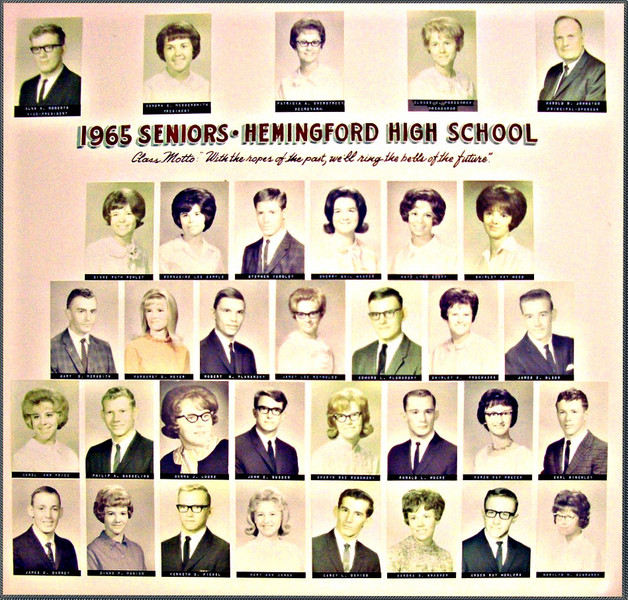 Student Council Highlights – Instigated the installation of a pop machine, also sold little football men statues and sweatshirts. Students began the habit of hanging out by the soda machine in Hemingford, NE! 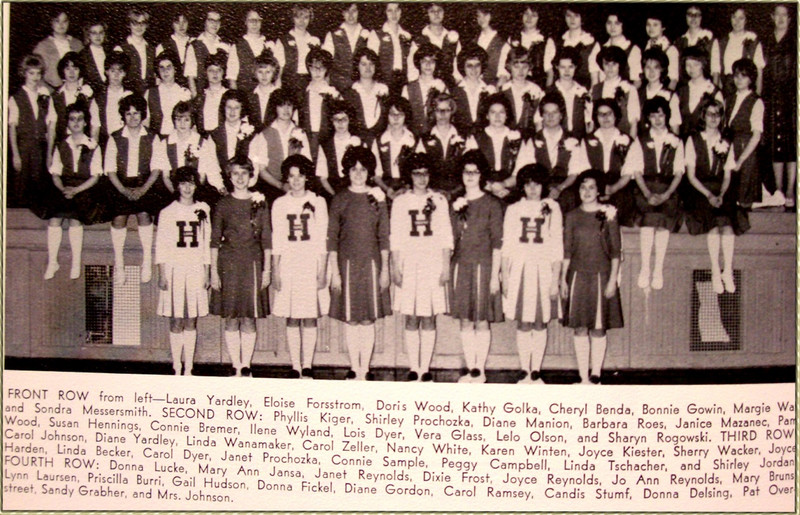 Music Department – It was State Fair time in the fall for Hemingford High School’s Band! Besides performing at band day at CSC, and marching in Hemingford’s parade, the band attended the Northwest Conference Clinic in Chadron, and performed with the chorus and small groups at Christmas and in the spring. Pat Overstreet was named as outstanding band member. Superiors at District Music Contest went to Dave Minich, Tenor Sax and Sax Quartet, Carol Price, piano, Sherry Wacker and Diane Gordon with vocal solos, and the Madrigal singers. As many as ninety students participated in chorus. Carol Price and Nancy White were accompanists for the chorus.

Drama and One Acts – Fourth Annual “Elmer” night was held at the Roxy Theatre. Winners were Steve Yardley, Best Actor; Linda Wanamaker, Best Actress; Arlin Sample and Kaye Scott won supportingrole awards, all in the pep club play. In the Junior Class play, honors went to Greg Rosenberger and Kathy Golka, while Don Lawson and Linda Wanamaker won as supporting members. The One Act play was “The Ugly Duckling”, with Don Lawson and Kaye Scott taking top honors. The play won a superior at Districts! Also winning a superior was the one act, “Dust of the Road”. In the senior class play, Phil Gasseling and Eloise Forsstrom won honors, with Arden Wohlers and Sharyn Rogowski picking up awards for their supporting roles. Best costume award went to Steve Yardley for his part as “dust”. The all-around newcomer was Linda Wanamaker, while the all-around senior was Steve Yardley. Eloise Forsstrom and Pat Overstreet won superiors at Districts. The junior class play was “Mrs. McThing”, while the seniors performed “The Marriage Machine”. The Pep Club Play was “It’s Great to be Crazy”. In speech, Hemingford finished as conference runner-up to Sidney High School.

Football – Coach Dennis Kuhn’s Bobcats finished the season with a record of 2-6, with victories over Mimatare and St. Agnes. Top tacklers were Arden Wohlers and Ed Planansky, while Ron Hucke and Ken Fickel were the leading ground gainers. Dennis Gasseling won all-state honors, with Ken Fickel and Jim Olson the team captains.  The reserves finished at 1-3, and were coached by Mr. Belina. 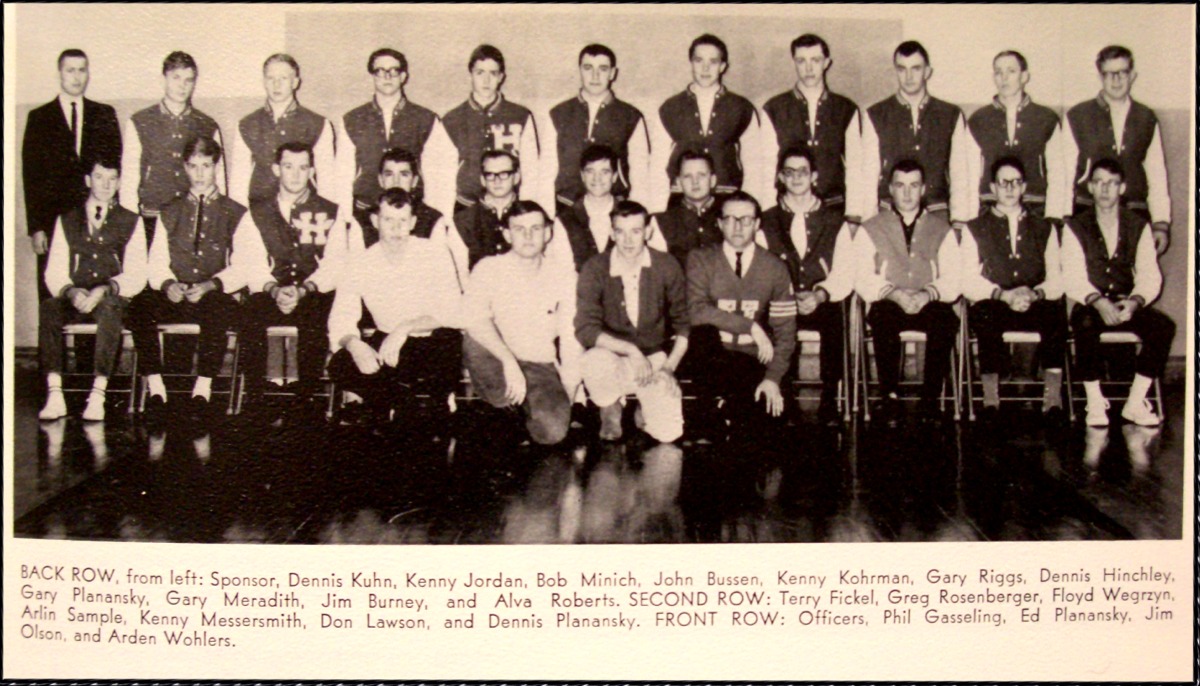 Volleyball – This was the first year for intra-school volleyball at Hemingford.

Girls Track and Field – This was the first year that girls track was offered at Hemingford!

Clubs and Activities – “The Feline”, the school newspaper, was published by mimeographing the pages or at the Ledger. The junior class was responsible, with Greg Rosenberger serving as Editor In Chief; Bonnie Gowin as  Assistant Editor; Donna Fickel, Business Manager; and Barbara Roes, Activities Manager. FHA gave an opportunity to the girls at Hemingford to take part in life time skills, including playing host to two banquets, Betty Crocker National Exams, and State Convention. Carol Zeller and Barbara Roes attended with sponsor Miss Clark.

Prom Theme – “Blue Hawaii”, The stage was adorned with a “massive” green mountain, topped with beautiful tropical flowers. Everyone was given leis, and boats and flowers decorated the tables. Master of Ceremonies was Don Lawson, Ken Messersmith of the junior class gave the welcome, and senior class President Sonya Messersmith gave the response. The Hi-Tones from Scottsbluff provided the music till 12:30 AM. Many of the prom-goers then went to see ”Blue Hawaii”, playing at the movie theatre. The students were treated to a second feature, and then finished off the celebration with breakfast.

Senior Class Motto -  “With the Ropes of the Past, We’ll Ring the Bells of the Future”

Special or Unique Happenings – Reverend Paul Martin, Methodist Minister, spoke at graduation  about, “ What to do With Your Life”, while Rev. A.D. Lewis, and Elder Norman Sharp gave addresses at Baccalaureate, along with the Rev. David Harris. Songs were performed by Sherry Wacker and Diane Gordon. Senior sneak was in Denver, with a 4:00AM departure from Hemingford! The class stayed at the Heart O’Denver Hotel, and traveled to Golden to the Coors Brewery. They ate at the Drumstick Restaurant, and spent time at Celebrity Lanes. The seniors then saw “It’s a Mad, Mad, Mad, Mad World” at the Cinerama, and “froze” waiting to get into the U.S. Mint. After shopping, the class boarded the bus and headed home, arriving tired but happy.

Awards -  Regents Scholarship went to Diane Manion. The Elks scholarship was given to Bob Planansky, and Pat Overstreet was awarded a scholarship to Nebraska Wesleyan. Sondra Messersmith was given the 4-H council scholarship.

Yearbook Dedication – The theme for the yearbook was, “ Education is the Light of the World”