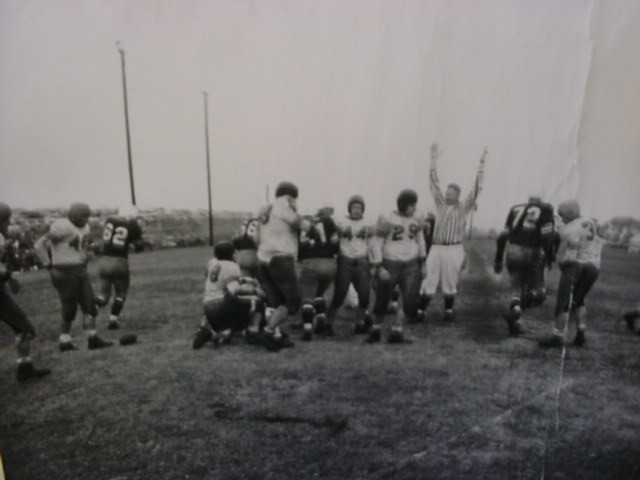 The Information contained here was taken from Yearbooks in our district archives. The reader will notice many years in the 1930's and 1940's have no record. That is because no yearbooks for those years have been saved by the school, or in some cases, no yearbook was published.

During the Second World War, many things were conserved at home while the war was waged overseas, including the expense of making and publishing a yearbook.

Readers are encouraged to bring forth yearbooks or other materials that could shed light on those years, so that the blank spaces can be filled in.

Congratulations to the coaching staff and the boys of 2014 for hitting the highest level possible in high school football!. That years' squad went 13-0 with their final win over BDS (Bruning-Davenport-Schickley)  in the 2014 State Championship Game at Memorial Stadium in Lincoln (52-8)  No other Bobcat Team has finished undefeated. Head Coach was Jordan Haas and Assistants were Randy Hiemstra, Tim Hiett, and Taryn Wood.

Congratulations to the coaching staff and the boys of 2013 for also joining an elite group of successful teams from the past. This years' squad went 12-1 with the lone loss to Exeter-Milligan in the 2013 State Championship Game at Memorial Stadium in Lincoln. Only five other Bobcat Football teams have had one loss seasons! Head Coach was Jordan Haas and Assistants were Randy Hiemstra, Tim Hiett, and Taryn Wood.

Please click on the link  BELOW to get the won - loss record for the past 80 years!