Dozens land sunny side up

Marv Spath and Ron Foster get ready to drop a John Deere Designer Egg Case. (Click on Thumbnail once story opens, for more pix)
A parachute design was used by several Kindergarteners
A large crowd was on hand Monday.
The older grades took some time to study kindergarten design and physics.
Kindergarten teachers Linda Folkerts and Kerri Morrison teamed on the project and served as final judges on the success of each crafts landing.
Mrs. Folkerts shows another lucky lander, as the crowd cheers.
Students in grades K-6 took some time to observe what has become a tradition at Hemingford Elementary.
Mrs. Folkerts and Ms. Morrison search through the packing to see if the egg made the trip intact.
Parents, Grandparents, and friends turned out to see how this year's eggs would land.
Gravity, high winds, and anxious onlookers all played parts in Monday's Egg Drop.
Mrs. Folkerts and Ms. Morrison show off two more lucky eggs.
The Egg Droppers begin their long climb to the top of the school with large bags of carefully designed egg-crafts.
Some designs were small, some were medium, and some were eggstremly large!
A beautiful spring day, a crowd chanting as you look down from 30 feet, and lots of fresh air blowing at your backs at 35 mph........perfect! 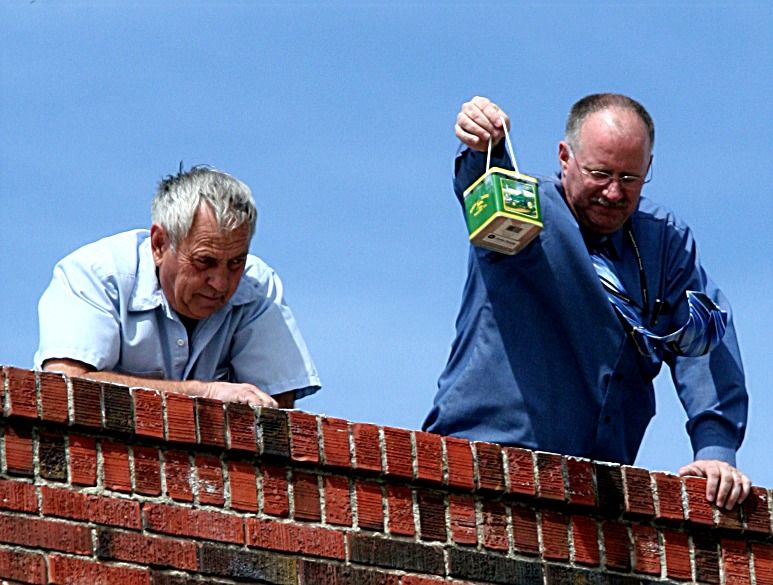 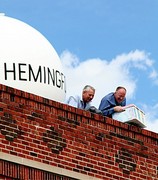 The 2009 Hemingford Elementary Kindergarten Egg Drop was a success again this year, with students in Mrs. Folkerts class and Ms. Morrison's class designing a variety of padded and not-so padded crafts to be dropped from the front of the 1926 Elementary building.

Marv Spath, head of Maintenance, and Ron Foster, Elementary Principal, once again hauled the varied packages upwards on ladders, and dropped them one by one to cheering crowds made up of elementary students, their parents, grandparents, and other guests.

Most eggs arrived safely, with just a few casualties. Generally the crowd was able to guess the individual outcomes by the sound of the craft landing on pavement 30 feet south of take-off, but there were some notable egg-ceptions; a Kohl's bag parachute used an assist from a bicycle's handlebars to keep it's occupant from scrambling itself, while another that resembled a heavy package of Bagels straight from Raben's made a very solid landing amid gasps from the audience, yet survived intact.

Thanks to Mrs. Folkerts, Ms. Morrison, Mr. Spath, Mr. Foster, all those that were able to attend, and of course to the many future scientists in this year's Hemingford Kindergarten classes.